Donald Trump and Alec Baldwin got into a Twitter feud after Trump anxiously attempted watching the not so funny skit performed by SNL star Balwin this weekend. Honestly, I didn’t find it too entertaining either. He tries really hard to offend the guy, resulting in a not so funny impersonation of the President-elect. What a joke. I side with Trump on this one…FAIL!

VIA| The cold opener Saturday night ridiculed the president-elect’s tendency to retweet random followers on Twitter when they praise or compliment him.

Pretty pathetic…right? How can you blame Trumpf or turning to Twitter to reach out to his followers when he is being sabotaged and muted by the main stem media?

Trump hilariously responded to the Tweet, as Trumply as as we’d expect him to:

Alec Baldwin, who portrays Trump on the show, replied to Trump’s criticism and told him to release his tax returns. 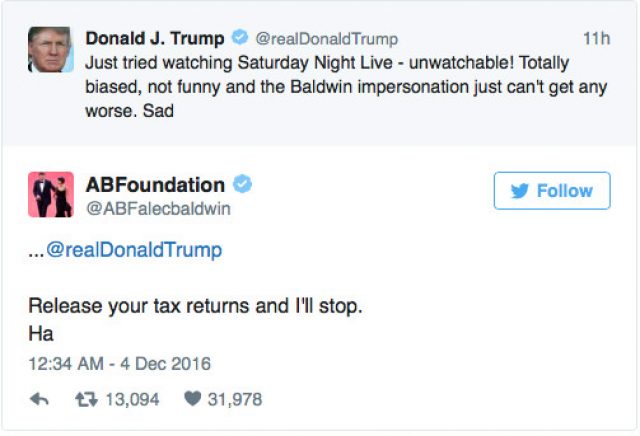 Do you agree with Trump? Does Alec’s impersonation suck as bad as he claims? Or did you find this skit to be hilarious?