The Lone Star State is currently experiencing a massive heatwave that is straining its electrical power grid, with this EVs are advised not to charge during peak hours.

Following the advisory, Tesla is asking all Texas-based customers to avoid charging their electric vehicles during certain times of the day.

The Electric Reliability Council of Texas (ERCOT) declared that six power generation facilities stumbled offline yesterday, (ERCOT) is calling on residents to conserve electricity during the recent heatwave, as the system is being pushed to near-emergency conditions.

“A heat wave is expected to impact the grid in Texas over the next few days. The grid operator recommends to avoid charging during peak hours between 3 pm and 8 pm, if possible, to help statewide efforts to manage demand”, an in-car alert sent to Tesla owners reads, as reported by Electrek.

Texas uses a mix of fossil fuels and renewables to keep its electrical grid running. When major heat waves move through the state, wind power is often decreased due to a change in pressure in the atmosphere. Thus, the state’s wind turbines are failing to produce the necessary amount of energy to keep the grid operating without significant problems. 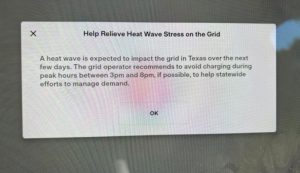 More details of this report from The Gateway Pundit:

The ERCOT website indicated late Tuesday that it only had about 3,600 megawatts of reserves, which is enough to power three-quarters of a million homes. The lack of power reserves is a genuine concern for more than 26 million state residents.

The state is expected to register temperatures of more than 100 degrees in the coming days. The heat also stops wind power from being generated in Texas, which usually provides the state with a quarter of its electricity.

In an interview Tuesday with Fox News Digital, energy expert Jonathan Lesser warned that the power crisis in Texas underscores the broader problems with green energy.

Lesser argued that due to the lack of reliable utility-scale battery storage infrastructure, forcing a green transition will lead to more power outages.

“The reality is: we’re going to have to get used to more blackouts as long as we continue down this green energy path,” Lesser said. “The technology simply isn’t there. You’re going to either have more blackouts or more requirements to conserve energy.”

Lesser pointed to the lack of reliability of wind energy during the summer.

“So, it’s not surprising at all that Texas, which has the largest wind capacity of any state in the country, is seeing this problem,” he continued.

Lesser pointed out that the U.S. utility-scale battery storage infrastructure is currently insufficient. According to the U.S. Energy Information Administration, the country has about 4,605 megawatts of total battery storage but regularly consumes more than 400,000 megawatts daily.

Pushing too quickly for green energy will lead to a lack of power and a direct impact on most Americans.

Given that Texas also has the third-highest number of electric cars registered in the entire United States, it’s easy to see how reducing the number of EVs charging at one time could reduce the stress on an already taxed grid.

Another possibility to help ease grid issues in the future could be a technology found in some EVs called bidirectional charging. By using the stored energy in an EV’s battery pack, a vehicle can deliver power back into the home through the same connector it uses to charge. Presently, Tesla does not offer this capability in its vehicles.

Wendy Rogers Just EXPOSED Kevin McCarthy For The Liar He Is!