I remember that when I was younger when you would have to collect unemployment that it would almost be a mark of shame if you had to do it.

They would put you through so many different hoops if you found yourself without work that you would run screaming to try and find a new job.

Now, it seems that people would rather sit and home and suck the government dry before putting in an honest day’s work. Thanks to Joe Biden, we are going to be seeing a lot more of that…

Democrats used to be the “party of the working man” (and later “working woman”).

Oh, sure, they keep telling people they are but they’re really not. They’re what the Republicans used to be accused of being — ‘the party of the rich.’

Meanwhile, under President Donald Trump, the Republican Party became the party of Mr. and Mrs. Working Class American, as he expanded the party’s base and ethnicity during his tenure.

Democrats continue to alienate them, however, while pretending to support them — like with calls to raise the minimum wage nationally to $15 an hour.

Oh, that sounds so good — ‘what working-class champs those Democrats are!’ ‘They really care!’

Hell, no, they don’t. Because if Democrats did like working-class Americans, they wouldn’t kill their jobs with such an obscene demand on private businesses (that few of them have ever run).

President-elect Joe Biden’s effort to raise the federal minimum wage from $7.25 to $15 per hour is estimated to kill as many as 3.7 million jobs, according to a recent nonpartisan analysis by the Congressional Budget Office.

While the $15 federal minimum wage would boost workers’ earnings, the CBO says that some of the higher earnings would be offset by higher rates of joblessness.

Revealed: The REAL President Who Is Running Things Instead Of Biden! 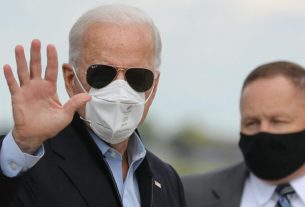 Why IS The White House Predicting 100 Million New COVID Cases?

What Alec Baldwin’s Film Crew Complained About BEFORE The Shooting Is Beyond Sad!