In the video, distributed by Iran’s state-controlled Fars News Agency, “the dome of the [U.S.] Capitol explodes, the men fire at the White House and storm it, and men, including U.S. President Donald Trump, and Israeli Prime Minister Benjamin Netanyahu lie dead on the floor,” according to an analysis of the video from the Middle East Media Research Institute, or MEMRI.

The video was released following the Trump administration’s killing of top Iranian general Qassem Soleimani in an airstrike. Similar propaganda has been circulating across Iran as its hardline regime attempts to foment anti-U.S. fervor across the country.

“We are going for the big fish. A fish rots from the head down. We should target their head…. If we want to hit them, tonight is the time,” Iranian military planners say in the video, which was translated by MEMRI. 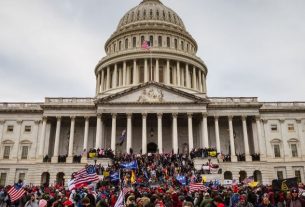