We previously reported that there is a possible cold war happening between Kamala and Biden. Now, an OANN reporter confirms it.

“There’s a “war” going on between Kamala and Joe,” an OANN reporter Jack Posbiec and his secret WH “source,” confirms it.

According to Jack, it is more likely a power struggle as he describes the ongoing conflict between Kamala and Biden.

Kamala doesn’t feel like she’s being properly “groomed” to take over the WH, Jack added.  And she may be right – her popularity is in the crapper – for lack of a better word.

Kamala felt like she had been blinded by the Biden Administration, first – during the whole “US border” crisis. And now, the Afghanistan mess has really brought everything to a boiling head.

Jack’s source confirms that Kamala refuses to speak about the whole Afghanistan mess because she doesn’t want to be part of Biden’s mess.

And it is very curious how quiet Kamala has been lately – something Jack points out in the tweet below:

“Kamala Harris has been eerily quiet over the last week, as she and Joe Biden seem to be in the middle of a White House shade war. Indeed, Harris hasn’t been seen publicly in six days after she refused to join Biden for his Afghanistan press conference on Monday.”

BREAKING: Biden and Kamala Camps Falling Out Over Afghanistan Disasterhttps://t.co/P0RZ1L0jHK

But it’s what Kamala did during Biden’s godawful speech to the nation on Afghanistan that really got the rumor mills churning.

If you watched the speech, you’ll know that Kamala was missing.

But she was nowhere to be found this time.

Well, nowhere to be found “on screen…” because according to Jack’s source, Kamala was actually watching the speech from inside the green room.

Here’s what he said:

“Rather than standing in her usual spot behind Biden’s right shoulder, she watched the speech from the “green room.” The shady move came as a shock after she hailed being the “last person in the room” when Biden announced his decision to withdraw troops last April.”

Rather than standing in her usual spot behind Biden’s right shoulder, she watched the speech from the “green room.”

The shady move came as a shock after she hailed being the “last person in the room” when Biden announced his decision to withdraw troops last April.

Wow, that does sound like some “shade” is being tossed around big time.

The last time Kamala spoke publically – as of this publishing – was nearly one week ago.

Ya gotta figure, it looks as if Kamala is literally abandoning Joe in his darkest hour of need.

And in politics, that’s a pretty darn big deal.

**RED ALERT**: 6 Facts About ISIS That Obama Has WITHHELD From The People… 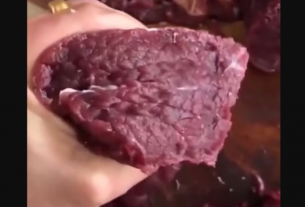 When The Police Found This Man Dead, They Said It Was The Most Sickening Thing They’d Ever Seen!