Skip to content
Home>Uncategorized>They Asked About Durham, And The White House Totally Clammed Up!

We are all aware of how Dems becomes defensive when they were asked about a certain question that doesn’t come to their narrative. It happens all the time, they are really good at dodging…

But this time, they became almost speechless and even avoided the question about the recent Durham bombshell. It seems like the White House didn’t expect to hear this type of question as Psaki’s sidekick Karine Jean-Pierre’s entire facial expression changed after one reporter asked her about Durham. All she can say was “can’t speak to that” until she was blue in the face.

Karine Jean-Pierre doesn’t even try to answer this question about the bombshell Durham revelations. pic.twitter.com/QUrBSJ6Thu

“Does the president have any concerns about a candidate for president using computer experts to infiltrate computer systems of competing candidates or even the president-elect for the goal of creating a narrative?” Fox News White House correspondent Jacqui Heinrich asked.

“That’s something I can’t speak to from this podium, so I refer you to the Department of Justice,” Jean-Pierre replied.

The reporter continued to press Jean-Pierre on the report, asking if monitoring internet traffic is spying. The deputy press secretary repeated that she “can’t speak to that report” and again referred her to the DOJ.

“Jacqui, my answer is not going to change, I refer you to the Department of Justice,” Jean-Pierre repeated. “I can’t speak to that from here.”

They’re certainly getting less and less creative with their dodging these days.

Really makes you long for the days when Psaki said “circle back” on repeat, at least she sort of “acknowledged” stuff back in the old days.

This story should be one of the biggest stories on the planet these times. But these people including the media are all just treating it like it wasn’t a big deal and even dared not to talk about it like it didn’t happen.

This is the reason why most people no longer trust the things they read and hear from the media and the government. people were already aware of how dishonest they are. 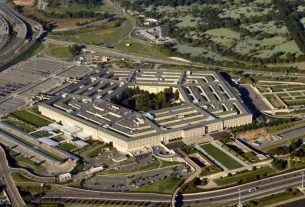 The Pentagon Just Admitted To The Ukrainian Biolabs…

Michigan Witness Speaks Out — Saw the Biden Ballot Dump at 4 AM and Witnessed Tampering with Tabulators! (VIDEO)