If I ever needed more of a reason to be a vegetarian, this is it.

An ‘unsettling’ video that captured a muscle spasm in freshly cut meat has left viewers vowing to make some serious diet changes.

The video, which has gained more than 407,000 views, shows a slab of meat erupting into spasms after being salted, making it look as though it were still alive. 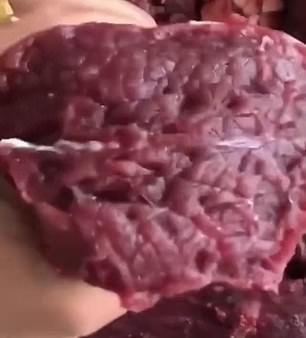 An anonymous butcher was seen holding the meat up to the camera so viewers could see the surface of the meat, which looked like it was bubbling as it reacted to being slathered in salt.

It’s not only disturbing, it will make your gag reflex stand at attention. Apparently, butchers add salt to the meat to draw the water out and to help preserve it.

But, I’m going to tell you. There is absolutely no reason I ever needed to see the reaction fresh-cut muscle has to salt. *Barf*

This video sparked a lot of debate on social media, with many people questioning whether it’s ethical to consume animal products in the first place. Some even argued that cutting animals for food was more humane than letting them suffer and die in factory farming.

No matter what your opinion is on eating meat, this footage definitely serves as a reminder that animals are sentient beings that deserve to be treated with respect. We should strive to make sure they have a good life and as little pain as possible before they end up on our plates. 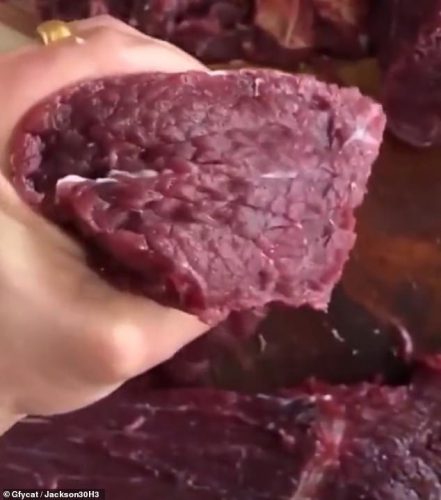 Viewers of the disturbing clip, which has recently resurfaced after being shared by the ‘Weird and Terrifying’ Twitter account, were left feeling disturbed after watching it.

One user wrote: “I could have done without this knowledge…”

Another added: “Well, this could make me give up eating meat.”

A third said: “Planning a vegetarian diet from now on. That’s horrible!”

“I’m going vegan,” a fourth declared, as another disturbed user commented: “My skin is crawling… so unsettling.”

Experts have since weighed in on the video, which originally went viral on Facebook in 2020, and say it only happens with the freshest of meats.

Lv Suwen, an expert in the Philippines animal health department said at the time: “You can rest assured, this piece of meat is very fresh and is from a freshly slaughtered animal. The central nervous system is dead but the nerve-endings in the muscles are still firing resulting in the jumping, because the nerves are not yet dead. This will stop after a short time.”

Watch the unsettling video below:

Ted Nugent Just Made A Major Announcement About The People’s Convoy!