Skip to content
Home>Uncategorized>What A Black Supremacist Did To This White Hotel Clerk Is Absolutely Revolting!

A black irate customer filmed the employee, identified only by his first name and last initial — Caleb C — in the midst of a mental and emotional breakdown after the customer reportedly called the employee a “fa**ot.”

Not only that his post has earned a lot of reactions from the internet, but he also earned himself as the
the world’s #1 race-baiter.

The video shows the black man aggressively harassing and berating a hotel employee who asks the customer for patience because he has “a mental illness” that is exacerbated by such pressure. Instead, the customer pushes harder, clearly provoking Caleb until he suffers a mental breakdown. 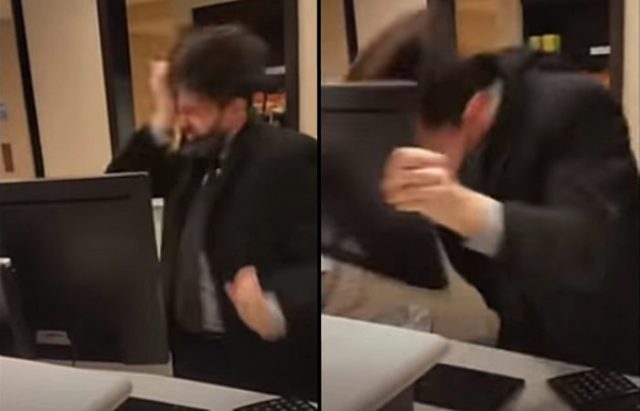 The transcript of their conversation:

“I’m not taking it out on you,” Caleb says before being interrupted.

“So why did you get mad and hit the computer?” the customer repeatedly asks.

“Because I have a mental…” Caleb says before he is cut off by the customer again.

“So this is the type of people they have working here,” the customer says.

“Wow. You’ve got to be kidding me,” the customer says as he pursues Caleb with his camera.

This is so bad to witness, especially when the vulnerable like Caleb who suffers a mental sickness is being bullied.

But as they say, after the rain, the rainbow always shines, Caleb has just earned himself $120,000 in just two days from a GoFundMe that was created for him.

Caleb has later addressed the encounter, “While I’ve now quit this position (my management supported me, and told me I’m welcome back. The guest was ejected from the hotel for escalating issues with staff and the owners.) I do have mental disorders,” he revealed. “I suffer from BPD and schizo-affective disorders. What this fine, 5’5″ bald gentleman behind the camera DIDN’T record was the fact that he called me a F**GOT for an associate’s mistake. He was aggressive and fishing for a reaction. He sure got it, and I’m glad this was a wake-up call for me to stop slaving away for corporations who do not care about you at all, or the guests.”

Report: THE PATRIOT PARTY IS ON ITS WAY!