Skip to content
Home>Uncategorized>Woman “Asked to Leave” Gym, Managers Claim Her Outfit Was “Too Revealing”

Gabi Goddard has absolutely made a name for herself as a fashion blogger from Hornsby, Australia. She is also very careful to go by her diet and get plenty of exercise. However, she was definitely outraged when she was asked to leave her favorite gym after a public school teacher had complained to management about her outfit.

She was actually at the gym a couple of Fridays ago, and she noticed that a staff member had approached her and she was told that she would need to go home and come back in a different outfit if she wanted to finish up her session.

Naturally, she asked the staff member why, and then she was told that there was a teacher supervising a group of teenagers on a field trip and the teacher was concerned simply because they thought that Miss Goddard might be “showing the children too much skin.”

“I was taken aback and horrified that your school would have so much say in how an independent adult woman might be exercising and what type of attire they might be wearing,” she wrote to the school. “You seem to be perpetuating values that are demonstrably harmful and they will definitely have real-life consequences. What does it say about us that we live in a world where a woman can be in a lower status over that of 14-year-old boys? A woman should honestly not be punished just because men and boys tend to objectify women

She went on to say that she is a paying client, and she is flabbergasted that the membership of the school would be given some sort of “priority” and have “more influence” compared to her membership.

The woman went on to state that her outfit simply “wasn’t gratuitous at all” and it did not violate the dress code at the gym. This female power lifter was also quick to note that she has never receive any other complaints whatsoever at any of the other gyms that she has visited.

The woman concluded her message by saying that it was very “discouraging” to her that this issue was even brought up at all! She noted how this teacher has a grave responsibility to “mold our next generation into well-rounded adults.” However, this female gym aficionado feels that the teacher is not doing a very good job, to say the least.

The Australian feminist Clementine Ford also shared the screenshot of this email on her Instagram page that she has entitled, “The Nasty Woman Club”. It attracted comments from followers everywhere, from all walks of life.

“This stuff always drives me insane,” one person commented. “My daughter or anyone else’s daughter should never be told what to wear by some stranger, even if they are an educator.”

There were others who said they felt “infuriated” and that this treatment was “unacceptable.” Additionally, some of these commenters inquired about joining forces with Goddard in her complaint against the school in question.

Still, there were some other people who questioned why the manager or owner of that gym did not go to bat for Goddard’s rights.

Goddard said that she was trying really hard not to get them involved, simply because she knew they had been struggling financially due to the COVID-19 closures in the area. She also was trying not to involve them just because she didn’t want them to possibly lose their contract with the school.

Of course, although there were some mitigating circumstances, Goddard was still incense enough over the issue that she ultimately switched gyms. As a matter of fact, Miss Goddard even went a bit further regarding the incident, posting a video of herself where was engaging in her workout at a different gym. In the picture, she was wearing striped leggings and had a blue crop top on. She did caption the picture with, “Don’t be looking at my bum, however.”

Insofar as the gym, maybe this will blow over, and maybe it won’t, but Goddard does have a valid complaint. If the kids were objectifying her, they are the ones who should be punished, and NOT HER. What do you think about this incident in an Australian gym? 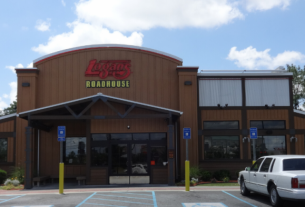 This Popular Steakhouse Has Closed ALL 262 Locations…

CANADA Showing EXACTLY What Biden’s Martial Law Will Look Like!

They Caught Him Peeping Under A Girl’s Stall, What These Dads Did To Him Is Pure Karma!