Some people get way too worked up about politics. I mean Hilary Clinton may well be a criminal, but that still does not condone violence of any sort.

Related to this, a man in New Jersey man was apparently beaten with a crowbar because he was wearing a Donald Trump shirt, according to local police.

It seems the 62-year-old male victim of the attack reported that he was walking on a street in city in New Jersey last week when a younger man in an old, gray vehicle began to harass him about his T-shirt, which read “Trump for President: Make America Great Again,” with an image of the controversial Republican presidential nominee.

Of note, authorities say the man in the car followed the victim to a Friendly’s Restaurant and came up to him in the parking lot with a crowbar. He then struck the victim several times, but fled before police arrived on the scene.

The victim wished to remain anonymous, and was treated by paramedics for minor injuries to his forearms, hands and thighs following the attack.

Here is the shirt which drew so much ire. 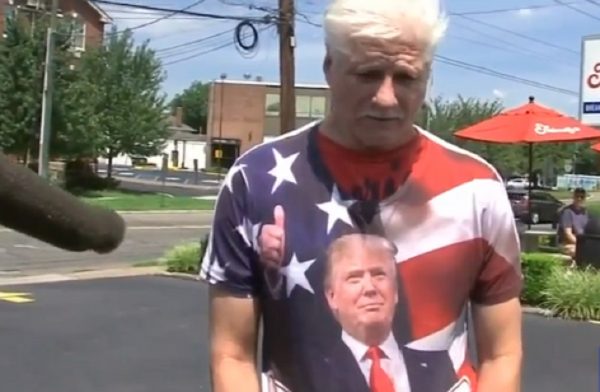