You could caption this one “no good deed goes unpunished,” but that wouldn’t be accurate – because what Jude Law was trying to do was not a good deed.

There is little to no good being done by Europe being inundated with unassimilable migrants from Third World hellholes. Europeans are going to lose their continent and then become refugees themselves. And the regular citizens in Europe, who are ignored by the political class on the continent in ways the American people would never tolerate (we think we’re unhappy with the lack of responsiveness of our own leadership to our concerns, particularly on questions about immigration and border security, but our concerns pale in comparison to Europe), know they’re losing their countries.

And yet Jude Law, leftist ideologue celebrity, goes to embrace the noble savages in the Calais migrant camp and denounce the racist French rabble who do not want them there.

Perhaps we can caption this “Social Justice?” 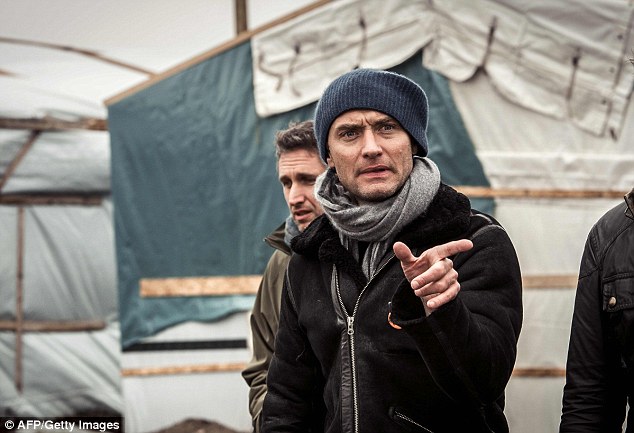 Security guards hired to protect Jude Law when he visited the ‘Jungle’ migrant camp were reportedly targeted by rock-pelting migrants just moments after the actor boarded the coach home.

The star made the journey to northern France last week to highlight the plight of child refugees who are being evicted under a move by French authorities to demolish the southern part of the camp.

He was joined by singer Tom Odell and a film crew, who captured him on camera as he urged David Cameron to let the hundreds of children at the camp come to the UK.

But moments after the celebrities had boarded the production team coach back to Britain, their security team was ambushed, according to the Sunday People.

The attackers reportedly hurled stones at the men before stealing their mobile phones.

A source told the newspaper: ‘We were shocked to see some of the migrants acting like football hooligans. The security team had stones thrown at them and two had phones smashed and stolen.’

The migrant camp is a Third World enclave in the middle of the French coast, which sprung up because the migrants are trying to reach the UK and its generous welfare benefits. The French want it dismantled, but naturally the Left is fighting to keep the squalid hellhole intact.

The official deadline for migrants to leave the most southern part of the camp was on Tuesday and the first phase of clearing migrants started on Thursday after a judge approved mass evictions.

Charities working in the camps say the demolition will destroy the homes of 3,000 people, including hundreds of children.

It will, they claim, ‘uproot again those who have already had to abandon their homes due to war and persecution’.

Law and his party made a big show of support for “the children,” and read letters from Jews to the Nazis as though there were some equivalence between the Holocaust and the mass migration of Muslims to Europe which has been largely debunked as a product of the Syrian civil war.

H*LL YEAH!! Watch This Badass Escape His Execution And Turn The Tables On His TERRORIST CAPTORS!