Skip to content
Home>Uncategorized>Florida Gov Just Warned Antifa To NOT CROSS THE BORDER!

Gov. Ron DeSantis (R-Fl.) makes a bold move by warning ANTIFA/BML rioters who want to destroy the peace of state as they did in other states.

During the press conference last week, Republican Florida Governor Ron DeSantis warned rioters to stay out of his state and announce his support for law enforcement.

Last month, Gov. Ron DeSantis signed a new bill into law that aims to crack down on violent protests in the state. DeSantis signed the so-called “anti-riot” bill during a news conference in Polk County.

“It is the strongest anti-rioting, pro-law enforcement piece of legislation in the country,” he said.

The governor also boosted financial support for first responders in the state, doling out $1,000 bonuses.

DeSantis warned left-wing activists in Portland to stay out of his state during his speech – to address the lack of respect for law enforcement and the refusal of some leaders to crack down on rioters.

“Hey, if you’re in Portland, you think you can come down to Florida and do this?” DeSantis posed during the presser. “Stay out of our state, we don’t want you coming down here causing problems.”

“And if anyone does cause these problems, if you try to burn something down, if you try to harm anybody — but particularly a police officer — during one of these violent assemblies, there will be consequences,” DeSantis warned. “They will be swift, they will be severe, and they will be such that people that see that happen will know that that’s not something we want to do going forward.”

Earlier in the presser, DeSantis talked about the riots that swept the nation last summer, as well as the unwillingness of many liberal politicians to control the violence and destruction. “I think if you look around the country, what happens is, like in Portland, these people riot every night, they go get their mug shot and then they get put right back on the street to do it again,” he said.

“That’s what we don’t want,” DeSantis continued. “What we want to say is, you know, the difference between going out and doing First Amendment stuff, which obviously we all support, it’s part of being American. The minute you harm somebody else, or you harm somebody’s property, or you do those types of things, the only way we’re going to put a stop to it is to have very swift penalties for it.”

The Daily Wire highlighted in thier reports,

Speaking of the bonuses for law enforcement, the governor said: “Supporting our law enforcement and first responders has been a top priority for my administration, and it has never been more important than over the last year. As a state, we are grateful for their continued service to our communities. This one-time bonus is a small token of appreciation, but we can never go far enough to express our gratitude for their selflessness.” 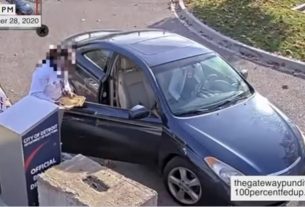 Dominion Voting Is About To Sue News Outlets For Supporting Trump!

YES! Senators Are Banding Together To Protect Military From The Commander In Chief!