Skip to content
Home>Politics>DID HOUSE SPEAKER PAUL RYAN LEAK THE 2005 TRUMP SEX TALK AUDIO? HERE IS WHAT IT MEANS IF HE DID

As The Daily Sheeple has previously reported, the manufactured outrage about Donald Trump’s 11-year-old locker room banter caught on tape is over-the-top ridiculous for a number of reasons, first and foremost the fact that we’re talking about Donald Trump here, not Mother Theresa. It’s pathetic by itself that people are acting surprised by this at all. He’s probably said a lot worse than that when not on tape. They all have,including our current president. The country needs to grow up and stop pretending we all live in a Disney film where our politicians are magically perfect PG-rated characters who never do anything untoward. The Internet and social media have long ago ripped that veneer to shreds, so how does anyone even have the capacity to feign innocence?

If this is the best the mainstream media can do — digging up Trump’s comments from over a decade ago or hypocritically honing in on his treatment of a Miss Universe winner two decades ago, then that’s actually kind of surprising because let’s be honest with ourselves: all of our politicians, even Mr. Pretend Squeaky Clean Paul Ryan up there have all done a lot worse when the cameras weren’t rolling.

Moving on, the timing here is key. Ryan, who has pretty much been a staunch “#NeverTrumper” this entire time, was actually set to campaign with Trump for the first time on Saturday. The audio was released on Friday right before the second debate and the scheduled appearance. Ryan was ready to go with a statement just a couple hours after the audio was released.

“I am sickened by what I heard today. Women are to be championed and revered, not objectified. I hope Mr. Trump treats this situation with the seriousness it deserves and works to demonstrate to the country that he has greater respect for women than this clip suggests,” Ryan said.

After the debate, Ryan again came out on Monday with yet another statement drawing attention back to Trump’s comments (completely ignoring the second debate). Ryan has now gone on record to vow that he will never campaign for Trump ever never ever ever.

According to Pundit, now Jerry Falwell, Jr. has suggested Ryan is the one that leaked the video in the first place…

Suddenly more “rumors” surfaced that it was actually a close Ryan advisor who did it — another #NeverTrumper named Dan Senor whose wife it just so happens used to work for NBC News and who has been working overtime to push the Trump video story even though he’s supposed to be GOP. 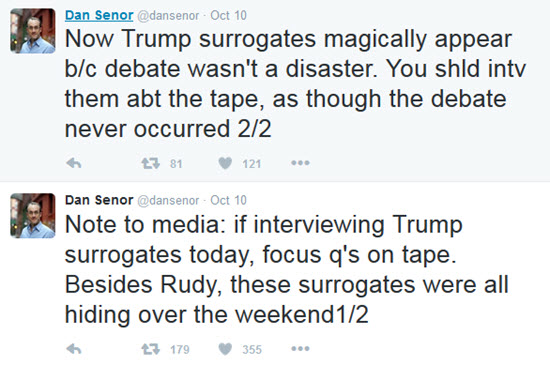 “As though the debate never occurred…” Exactly how Ryan is acting.

Senor’s wife, Campbell Brown, had a laugh about it all as well.

.@dansenor Writing about #BillyBush tapes, hearing your wife (ex NBC) got a hold of tapes and you pushed the story for your boss. Comment? 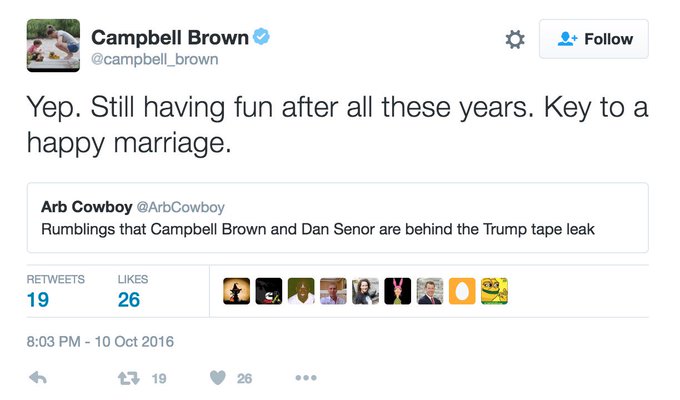 She later denied the allegations, saying she was just kidding and really wished she had leaked the tape.

So what does this mean?

If the establishment really wanted to “destroy Trump” so bad, why did they wait until now with this tape? That audio has been around since 2005. The Miss Universe comments are circa 1996. Think about it. Howard Dean‘s entire presidential campaign was ended for way less.

If the GOP was really so worried about Trump destroying the party or being their nominee, they could have gotten rid of him a long time ago if this information was enough to do so. They waited until he took everyone else out, and now they’re attacking Trump. The only person that benefits is… Hillary.

The longer you ponder that line of thought, the more the entire election (selection) looks like one giant stage show with everyone, including Ryan, playing his or her part. 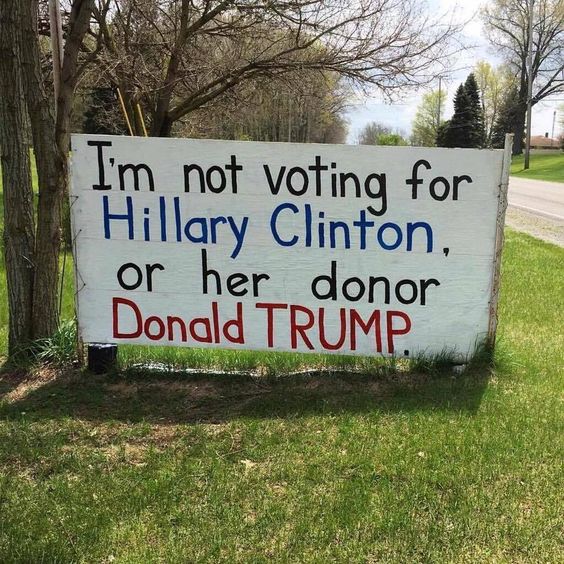 WikiLeaks Shows THESE (Dozens) Of JOURNALISTS Invited to SECRET Off-the-Record Dinner… WONDER WHY!

0 thoughts on “DID HOUSE SPEAKER PAUL RYAN LEAK THE 2005 TRUMP SEX TALK AUDIO? HERE IS WHAT IT MEANS IF HE DID”