Skip to content
Home>Uncategorized>Joe Rogan Just Took Woke Culture And Stuffed It In A Locker!

‘Straight white men would eventually no longer be allowed to go outside,” a 53-year-old former television personality ranted on his Twitter post.

One of the most popular podcast hosts in the world mocked and criticized white men and claimed on his show that straight white men were being silenced because of “woke” culture.

In an episode of “The Joe Rogan Experience” last week, the host spoke to standup comedian Joe List about evolving boundaries of what makes for acceptable comedy.

“Can you make a good comedy movie anymore, or have they made it so dangerous in terms of being cancelled that comedy movies are no longer something you can do?” Rogan asked.

“You can never be woke enough, that’s the problem,” he said on the podcast. “It keeps going further and further and further down the line, and if you get to the point where you capitulate, where you agree to all these demands, it’ll eventually get to straight white men are not allowed to talk.”

The 53-year-old former television personality continued to rant that straight white men would eventually no longer be “allowed to go outside.”

As List began to laugh, Rogan continued: “I’m not joking. It really will get there. It’s that crazy.”

The backlash was swift, as some noted that Spotify, which signed a deal worth about $100 million with Rogan last year, did not have any control over the content on his show.

“Joe Rogan made his comments about straight white men not being able to talk due to ‘woke culture’ on his podcast which was acquired by Spotify in a $100m deal, that has 11 million listeners per episode and lets him talk about literally anything,” one Twitter user wrote.

“Because it’s your privilege to express yourself when other people of colour have been silenced throughout history,” Rogan added. “It will be, you’re not allowed to go outside. Because so many people were imprisoned for so many years.”

Naturally, the comments, which are hard for rational people to argue against, sent Twitter’s leftists into a frenzy.

Rogan certainly angered the right people, meaning he hit the nail on the head. All those who are calling for his cancellation have proved his point.

The logical conclusion of “woke” culture, should it continue, will be for traditional men to be completely shut down, and that’s assuming such an end would be peaceful.

A Top Republican Has An amazing Way To IMPEACH JOE BIDEN! 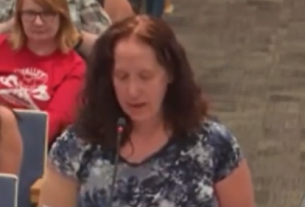 Julia Roberts Has Offered A Bounty For The DESTRUCTION OF AMERICA!