The media has created a firestorm over lines in Melania Trump’s RNC speech that were copied from one Michelle Obama made in 2008. The hype has distracted the campaign right when they need it the least.

Well now the speechwriter for Melania, a woman named Meredith McIver, has just offered her resignation — taking full responsibility for the plagiarism.

But what Trump did in response is remarkable: he has refused to accept it.

Wow…that is a bold move indeed. 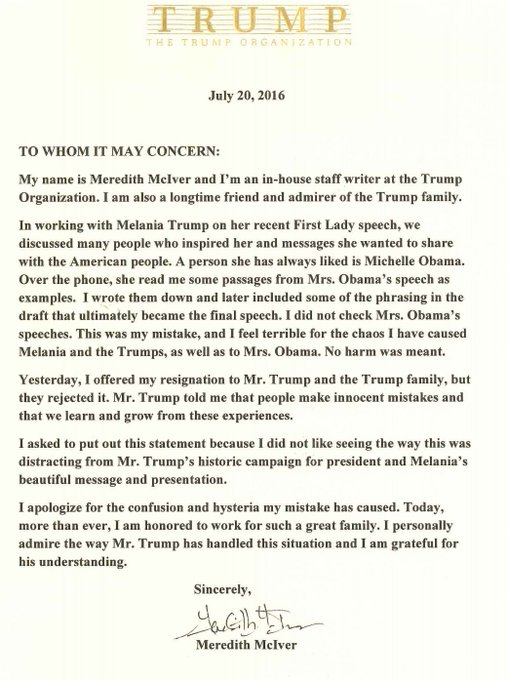 McIver apparently is considered a valued Trump employee — having been a ghost writer for years — and Trump is simply unwilling to hang her out to dry over what he clearly considers a tempest in a teapot.

It was a very decent thing to do. And politically, it’s a brilliant move by the maverick first-time candidate, making him look both decisive and compassionate.

To underscore his feelings about the matter, Trump posted this awesome tweet that is going massively viral gaining 500k likes on social media within minutes…

“The media is spending more time doing a forensic analysis of Melania’s speech than the FBI spent on Hillary’s emails.”

Trump for the win! Now hopefully Team Trump can put this behind them, and get back to beating the crap out of Hillary.