Skip to content
Home>Uncategorized>She Fired And Said “Get Out Of My House”, He Didn’t Get The Message So She…

When you are faced with a home intruder, it requires a lot of quick thinking on your feet, and sometimes you need to make split-second decisions to save your life.

70-year-old  Virginia Morrison told outlets she was protecting herself and her partner after a stranger—later identified as 38-year-old Ezequiel Rosario-Torres—entered her home on Sunday, said nothing, and refused to leave, even in the face of separate warning shots.

Here’s what she said, according to WESH-TV:

“I heard the door handle kind of rattle. And then the door opened, and the guy stepped in my house,”

“I didn’t know who he was. I looked at him, and I said, ‘Who are you, and what do you want?’ [He said] nothing. The whole time the guy was here he never said one word, and I never saw his eyes move. Total blank.”

Morrison said she tried to swat the intruder with a broom, but that failed.

And here’s what Morrison said, according to Fox News:

This is why our 2ndA is so important. In any other country she’d just be another rape/murder statistic.

Then, Morrison ran to the bedroom and yelled to her partner Charlie, who is almost 80, that someone was in the house.

“I looked at him, I said, ‘Get your gun!’ because he had a 45 laying on the bed. ‘Get your gun. That gun never fazed this guy. Just a total blank.”

Charlie tried a warning shot and even called 911, but it didn’t bother the intruder. Instead, he continues to escalate the situation by going forward.

This is when Morrison decided to go and get her own firearm. She said with her own gun, she fired off another warning shot to make sure the intruder stopped in his tracks or ran off. But he kept coming towards her.

She was in disbelief that she had actually shot him. She recounts the incident, “I didn’t realize I hit him but once I looked, he had a hole in his t-shirt and I thought I got him.”

Deputies with the Orange County Sheriff’s Office were called to her residence with the instructions that a ‘burglary was in progress’ but when they got to the scene they discovered the alleged burglar shot.

Deputies transported the alleged robber, named Ezequiel Rosario-Torres to the hospital where passed away shortly after.

Recalling the horrific incident to the police, Morrison said, “I didn’t know what he was going to do, but I knew I was going to protect myself. I’m a fighter. I’m going to defend myself.”

But Morrison also said that the shooting had been weighing on her since Sunday. She said to the press, “I have God in my life. That’s my main thing, wondering if God’s going to forgive me for taking a life. It bothers me.”

The case is currently with the  State Attorney’s Office, who will be the one to determine whether or not charges will be filed for the incident or not. 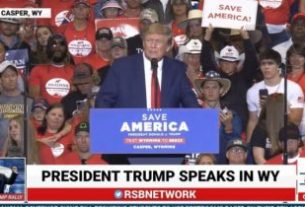 Revealed: The REAL President Who Is Running Things Instead Of Biden!