Skip to content
Home>Uncategorized>Stacey Abrams Has Just Been Handed A Big Time Loss!

In a special election for a state House seat in Georgia, Georgia’s Stacey Abrams and her group Fair Fight lost big to Republicans.

Numerous groups who claim to be for voting rights that Abrams has been connected to have led to several investigations from officials in Georgia because they have been doing slippery things.

According to the Open Secrets report:

Other big donors to the PAC are mostly Unions. The AFL-CIO and the NEA are $1 million donors to Abrams’ PAC, in December of 2019; the biggest donor to Fair Fight is Michael Bloomberg, who gave $5 million.

Voters on the right are energized; it looks like the tide is turning.

Republicans were able to increase their victory margin from 4% to 26%! In the election for House District 34, Republican Devan Seabaugh defeated Democrat Priscilla Smith.

Republican @DevanSeabaugh is far overperforming the 2020 GOP vote in a special legislative election for a conservative-leaning Cobb-based district. Bert Reeves won the seat 56-44 last year. Seabaugh is at 63%. #gapol pic.twitter.com/uEIte257aa

The CEO of Abrams’ organization Fair Fight had a case of sour grapes, Of course:

Numerous “voting rights” groups have been under investigation in the past, Stacey Abrams has been connected with them.

If “voting in Georgia when you are not a resident of Georgia is a felony,” Does the left care? They don’t. Our voting system has become a free-for-all where people can do as they please. It’s a hot mess…

They don’t. They don’t care because they feel the end justifies the means, and they know they won’t be punished.

Will they be punished, even though the Georgia Secretary of State just announced investigations into illegal activities by voter registration groups?

Voter fraud will continue until punishment is given to these criminals.

This comes as the news that Democrats promote a movement where Democrats would move to Georgia to vote in the January 5th Senatorial runoff, the group is under investigation for allegedly sending ballots to residents in other states. Georgia Secretary of State Brad Raffensperger has announced an investigation into a voter registration group founded by Democrat Raphael Warnock and founded by former gubernatorial candidate Stacey Abrams.

The picture below is Stacey Abrams:

The New Georgia Project was also investigated in 2014 with allegations it forged voter registration applications. “These third-party groups have a responsibility not to encourage illegal voting. If they do so, they will be held responsible,” The Secretary of State stated.

According to the Washington Free Beacon:

Stacey Abrams and Warnock have been investigated before now. Has anything been done? Nope… a case was referred to law enforcement in 2017, but charges were never brought.

The 100Percentfedup previously reported below,  in April of last year, the Georgia Ethics Committee launched an investigation into Abrams.

Georgia’s new director of the state ethics commission started his job on Monday and wasted no time getting down to business.

Former county prosecutor David Emadi plans to subpoena bank records from the campaign of 2018 Democratic gubernatorial nominee Stacey Abrams and groups that raised money for her.

“The new ethics chief…a Kemp donor and former Republican Party leader…is using his power to threaten and lob baseless partisan accusations at the former Abrams campaign when they should be focused on real problems like the unethical ties between the governor’s office and voting machine lobbyists instead.”

After Emadi was introduced to the media as the new ethics commission director, he discussed that the investigation into the Abrams campaign is “moving forward”:

“Those investigations are all moving forward. What I can say about the investigation into the Abrams campaign is, in the relatively near future, I expect we will be issuing subpoenas for bank and finance records of both Miss Abrams and various PACs and special-interest groups that were affiliated with her campaign.”

The investigations began after an audit of Abram’s campaign:

The picture below is Emadi: 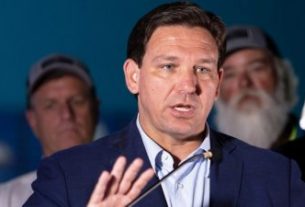 DeSantis Just Told Them He Is Going After Them For Throwing A Roadblock On….

How Much This Billionaire Wants For Reparations Is Insane!

What The Detroit Zoo Said About Vaccinations Is Absolutely Insane!