We all remember that during the Capitol riot on January 6th, a Trump supporter and US veteran Ashli Babbitt was killed. And according to The Gateway Pundit exclusive report in July, Babbitt’s shooter was confirmed to be Lt. Mike Byrd.

The heartbreaking scene when Babbitt a patriot was shot in a cold blood inside the US Capitol.

Imagine a woman who was unarmed and has no threat of any harm, being shot and killed while several police officers surrounding her without giving any warning. Right after she was killed by Lt. Mike Byrd, he fled immediately disappeared down the hall without any signs.

This confirmation of Babbitt’s killer has been confirmed by The Gateway Pundit which is also confirmed by the attorney of Ashli Babbitt’s family. Atty. Terry Roberts named her killer as USCP Lt. Michael Leroy Byrd in a statement they released on Thursday.

It was also recently reported that Congress was evacuated on Jan. 6 due to a pipe bomb threat. This was not because of Trump supporters walking the halls.

After it was confirmed that Byrd was Babbitt’s killer, he was exonerated. Byrd made a big crime, he gave no warning, he ran from the scene of the crime, he shot an unarmed woman dead who posed no threat.

And now he walks free.

In an interview with Newsweek last night, Babbitt family Attorney Roberts provided a statement. Roberts alleged racism played a role in the investigation:

Byrd’s attorney, Mark Schamel, did not dispute the positive identification. It adds to information from other sources who told Zenger in recent months that Byrd was the January 6 shooter. None of them would say so on the record.

Byrd is a controversial figure with a record of mishandling firearms, including once leaving a loaded pistol in a Congressional Visitor Center bathroom. Roberts said Byrd’s decision to fire his weapon on January 6 indicated his unfitness for duty.

“If I was a congressman, I’d be very concerned about him carrying a gun around me,” he said.

Typically, police officers who shoot civilians are named publicly. But the January 6 riot and the riots that erupted after George Floyd was killed by a Minneapolis police officer, divided the country along political, class, and racial lines—making officials cautious about revealing the name of a Black police officer who killed a white protester.

Roberts said race was “clearly a factor” in the decision to shield Byrd from public scrutiny.

“It’s something that has to be considered, because it’s just a clear pattern in the United States,” he said. “A white cop kills a Black individual? Their name is out there within a day. It’s all public. And look, a police officer is a public official. There should not be any exception for this.”

U.S. Capitol Police officials, police union representatives and government officials had repeatedly claimed that disclosing the officer’s identity would put his life and his wife’s in danger—and subject them to racial slurs. Lt. Byrd’s family roots are in Jamaica, according to one of his neighbors.

Killer Byrd will sit down with liberal hack Lester Holt to describe his senseless killing of an unarmed, 118-pound veteran and Trump supporter.

So will Holt ask Killer Byrd about leaving his loaded gun in a Capitol restroom?

What Has Happened To The Abortion Rate In Texas Is Unbelievable! 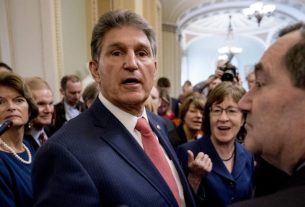 Manchin Has Finally CAVED And Proved He Doesn’t Care About ANY Of You!