Skip to content
Home>Uncategorized>They Are Now Trying To Block The Unvaxxed From Grocery Stores!

It’s ironic how the world are quickly changing from an optional vaccine to a mandatory thing, here in the United States – no vaxxed no Job or get fired, some world powers chooses thier citezens get hungry just to implement this tyrannical vaccine mandates.

While the debate over mandated “vaccine passports” rages on, a growing number of employers, businesses and venues are demanding proof of vaccination.

Just like what happened in New Brunswick, Canada wherein the government barred unvaccinated citizens from entering grocery stores to buy food. It’s now vaccine over food, they been using this pandemic to control people in order to implement thier personal liberalistic agenda.

Beginning Saturday, people in New Brunswick who do not show proof of full vaccination can be barred from entering grocery stores to buy food.

The measure was announced as part of the province’s “winter action plan,” which allows any business, including grocery stores, the option of barring unvaccinated individuals.

According to Health Minister Dorothy Shephard, it comes as the province sees a “very concerning” rise in COVID infections over the last two weeks, particularly among unvaccinated Canadians.

The province reported 97 cases and 2 deaths since Thursday. eTurboNews also reported the said provision that has been implemented in New Brunswick, Canada – No Jab, No Food policy:

Under a new provision announced by New Brunswick Health Minister Dorothy Shephard, grocery stores in the province are now allowed to turn away the shoppers who aren’t vaccinated against COVID-19.

The provision gives grocery stores, malls and salons the option of either enforcing physical-distancing rules or requiring proof of vaccination to enter their establishments.

“With winter comes colder weather, shorter days, more time spent inside and increased opportunity for COVID-19 to spread,” Shephard said. “It is important we have a plan in place that ensures our healthcare system is not overwhelmed, but also considers the mental, physical and financial health of New Brunswickers.”

Shephard suggested that abiding by the new measures won’t be difficult. “They are small actions that each person can take, but when combined, can make a big difference,” she said.

Other new restrictions include limiting household gatherings to 20 people, capping outdoor gatherings at 50 people, and requiring unvaccinated people to avoid indoor gatherings – a lonely and potentially hungry Christmas for the unvaccinated. Masks are now also required in outdoor public places when physical distancing can’t be maintained.

Yet Another Member Of Congress Has Called On Biden To Resign! 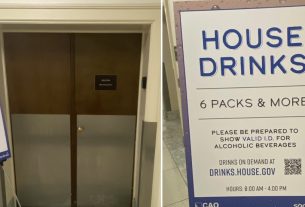 Caught On Surveillance! Little Girl Is Snatched By Kidnapper In Walmart