Skip to content
Home>Uncategorized>They Sent Her Home For A Dress Code Violation, What She Came Back With Shut Them All Up!

Sometimes parents and others criticize schools for sexualizing young girls and punishing them for wearing something fashionable.

One more incident popped up on Facebook as the school year drew to a close, and the post went viral, not because of the “violation,” but because of how the student chose to respond.

An Oklahoma student was removed from class for wearing an outfit that was deemed inappropriate. When she was told to cover up, she did something that shocked her entire school and even turned into a viral social media post.

17-year-old Ross Lynn is a student in Oklahoma who chose to wear a pair of black leggings and a tank top to school. She covered it up with a long sweater and was sure that her outfit was above board. She was wrong. The school administration told her that her outfit was inappropriate and she was asked to go home and change.

Lynn followed the instructions given by the administration, just not in the way she was expected to…

Lynn returned to school in the same black leggings. However, she wore an oversized T-shirt over it, which allowed her to pass the dress code. However, she decided to write a poignant message on the shirt with a marker that let everyone in the school, including the teachers and her peers, that she was not willing to silently allow herself to be oppressed.

It read, “It doesn’t cover your crotch” at the front and, “You’ll distract the boys” at the back. 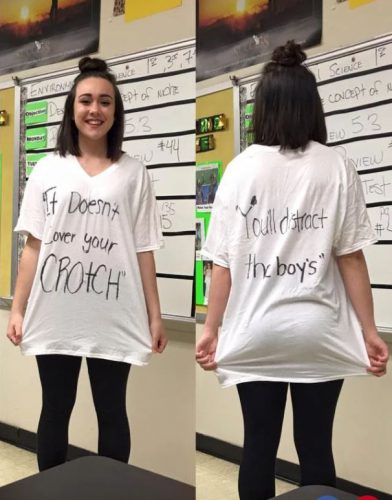 Lynn also wrote about her experience on Facebook because she knew that tons of other teens were also being treated the way she was – both inside and beyond the borders of her state of Oklahoma. She uploaded images that showed her in the “scandalous” outfit that she had been wearing initially as well as the other outfit she wore to cover up. She also wrote a heartfelt caption on Facebook to let people know that the incident affected her.

It read, “So today I was sent home from class, after being in school for two hours, for my outfit. Because I’m developed farther than the average girl my age, I am required to go home and change. . . . because I look like a CURVY woman and may distract young boys, I have to miss class and change my outfit. So once again, Society has failed to advocate young ladies by confining them in a box, where they are stripped from their sense of self-respect and self-expression, rather than teaching young men to respect the boundaries of young ladies.”

This young woman was able to follow the rules by also making a statement with her new shirt.

What Kinzinger Just Said About Trump Supporters Is Absolutely Horrific!

Pelosi Just Won An Award That Will Have Her Hiding In Embarrassment!