Skip to content
Home>Uncategorized>They Were On One Of The Greatest Shows Ever, But Now They Are In HUGE Legal Trouble…

“Storage Wars” wouldn’t be the hit reality show it is if it weren’t for the charm and masterful wit Brandi Passante brings to the series.  The show found its own diamonds in the rough in thrift store owners Brandi and her then-partner Jarrod Schulz; the duo’s lively banter and hilarious antics quickly made them fan favorites.

Despite being one of the most outspoken and brazen members of “Storage Wars” when it comes to treasure hunting, Brandi’s personal life is considerably more private and, in many ways, tragic.

In fact, her ex-partner and “Storage Wars” co-star Jarrod Schulz has been charged with domestic violence for allegedly attacking Brandi.

An unnamed law enforcement source told TMZ that Jarrod confronted Brandi when she was with friends at a bar in Lake Forest, Orange County on April 30. There, the two got into an argument before Brandi asked Jarrod to leave. At that point, he allegedly pushed her twice while yelling at both her and her friends.

On witnessing this, the people around called the cops who reached the bar after Jarrod had left the premises and took a report. According to the 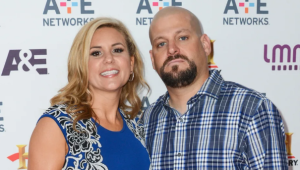 outlet, the police officers later contacted Jarrod for his statement but he denied getting physical with his ex during the heated exchange. However, The Orange County District Attorney’s Office has charged Jarrod with domestic violence and he is set to appear before the court for arraignment on Monday, May 24.

A week after the incident, Brandi shared a cryptic post on Instagram that read, “Longest week of my life!
Good supportive friends are hard to come by. Cherish you always @chelfreeman” and shred a selfie picture with her close friend.

Jarrod Schulz and Brandi Passante have been a part of the A+E series ever since it premiered in 2010. The duo also got their spin-off show titled Brandi & Jarrod: Married to the Job which was released in 2014 and ran for 8 episodes.

In the return of the 13th season of Storage Wars in April 2021, viewers came to know that Jarrod and Brandi have split. On the first episode of the show, Brandi announced that she and Jarrod split in November 2018.

However, they both shared that even though they have split they are still cordial with each other and will continue to be a part of the show just that they will not be going to auctions together anytime soon.

In that interview, Brandi claimed that she is basically now a single mother. She claimed she had done the majority of parenting even before the split.

The former couple shares two children together. They were two together for nearly twenty years.

It’s not clear if Schulz has a lawyer. TMZ reports that he has denied the allegations.

SLEEPY JOE Has Shrugged His Shoulders On COVID!