It is being reported that Case Western Reserve University has issued an apology to its students and closed down its campus for a week. Why?

Apparently the university agreed with the city of Cleveland to house some 1,700 police officers and 200 members of the Ohio National Guard there who will act as security at the Republican National Convention and that makes the students there feel “unsafe”.

A petition was even circulated on Change.org titled “Student Safety During Riot Police Occupation of Case Western Reserve University.” There are nine demands in the petition:

2) Riot police refrain from entering University-owned buildings, with the exception of their assigned residence halls;

3) The University informs riot police that they do not have jurisdiction on campus and that they shall contact campus police in case of emergency;

4) Riot police refrain from using alcohol or other mind-altering substances for the duration of their stay;

5) Riot police expressly consent to abide by University conduct regulations including, but not limited to: antidiscrimination, sexual harassment, substance abuse, and weapons policies;

7) The University informs the campus community of the following details by July 1st:

– The residence halls to which the riot police will be assigned,

– The dates and times the riot police will be on campus, and

8) The University offers alternative housing arrangements for students in University Summer Housing who request reassignment for the duration of the stay of the riot police;

9) The University provides a mechanism for the campus community to report incidences of riot police misconduct.

It has received 435 signatures so far.

Cleveland.com reports that University President Barbara Snyder emailed an apology to students, admitting the university “failed to give adequate consideration to the impact the decision would have on members of our community — in particular students staying in residence halls near the buildings housing the officers.”

The university also offered to hold classes off campus and made counseling and a “safe space” available to upset students. The university was also helping to relocate students so they wouldn’t have to stay on campus with the officers.

Campus is basically going to be shut down (via Cleveland.com): 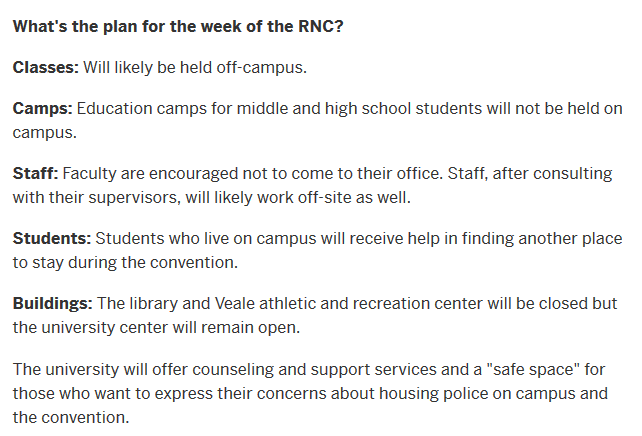 It’s a sad testimony to the police state in America that these college students do not feel safe with 1,900 law enforcement agents on their campus, isn’t it?

Then again, CWRU is about 34 miles from Kent State, and we all know what happened with some of the Ohio National Guard there during a period of civil unrest a few decades ago…