Skip to content
Home>Uncategorized>What Biden Did To A Young Boy During Jill Biden’s Speech Is Extremely Unsettling!

It is no longer a secret to everyone about Joe Biden’s controversial past. I mean, his thing with the kids and women is all over the news.

There were videos, photos, and recording about these for many years.

If you see him sniffing, nuzzling, and doing inappropriate and unwelcomed touching, don’t be surprised as these are no longer new when it comes to Joe Biden.

These already his habits even before he was installed as a so-called “president.”

Biden’s thing about women and kids was never been highlighted by these woke media. I mean, these victims already spoke out that Biden made them feel very uncomfortable with the way he act towards them.

But Biden always manages to get away from all this with the help of his woke media friends. I mean, they were immediately brushed off and expect that anything related to Biden is removed right away by the people behind him.

Yet, even after Joe was backed into a corner during the 2020 primary, and claimed that he would start respecting people’s space and not be so “touchy-feely,” he’s still being touchy-feely, it’s like he can’t stop himself.

So, when Jill Biden was giving a speech at a DC school, and Joe was there, he made sure to again, “shoulder rub” a 7th-grade boy on the stage.

And yet again, Americans were creeped out.

Creepily follows the kid, gropes him, then wanders off. pic.twitter.com/yMdwjXgO7N

Below is the other video of Joe.

Here’s what some people online are saying:

“This old perv belongs in an assisted living facility. This is just not normal, it’s sick. The fake “Dr” is an enabler.”

“Why can’t this guy just stop touching kids and women?”
“That SOB is frickin’ nuts!”

“Is there a reason why Joe can’t keep his hands to himself? Is it his disease?”

“He shouldn’t put his hands on any child, after his disgusting reputation”

“Why does he always gotta be touching and sniffing people? What happened to social distancing?”

And some who see Biden rubbing kids’ shoulders and backs, and whatever else he does, say he’s just being “grandfatherly,” and doesn’t mean anything “gross” about it.

With Biden’s age he should be a grandfather figure, but provided the fact that he has several or should I say a lot of numbers listed about his creepy habits that we’ve witnessed many times, he’s not the type of grandfather that every American child deserves. He should have some respect for everyone, and the American people in general, and just stop touching kids inappropriately.

If you need to make “contact,” then just shake the kid’s hand, and leave it at that, my God, why is this so hard for him to do?

After Family Says They Were Told To ‘Pull the Plug,’ Woman Wakes from 7-Month Coma 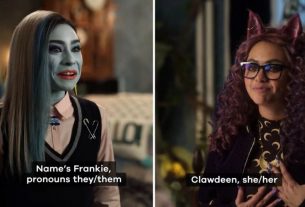