Skip to content
Home>Uncategorized>What This Hateful Woman Did To A Vet And A Service Dog Will Make You See Red!

People bringing their pet dogs into grocery stores can sometimes be dangerous — especially for those who depend on service dogs to help them with a disability.

And this is what happens to a disabled veteran and his dog while shopping at Walmart. A woman yelled at him for having a “pet” in the store. The confrontation was captured on camera and raises a lot of questions.

Dominique Weems has a youtube channel called “Service Dog Paws” wherein according to her channel’s about section, “spread awareness and education for Service Dogs and Invisible Disabilities.”

In a video captured on Dominique’s cell phone, a disabled veteran is shown walking a Chihuahua through the aisles. The dog locks eyes with Mya (Weems’ dog), and does not wear a service dog vest – that is when Weems started to yell at the disabled Veteran for having a service dog.

The woman decided to speak up. “You know you can’t have pet dogs in here?” she shouts in his direction. However, her words of advice weren’t appreciated. 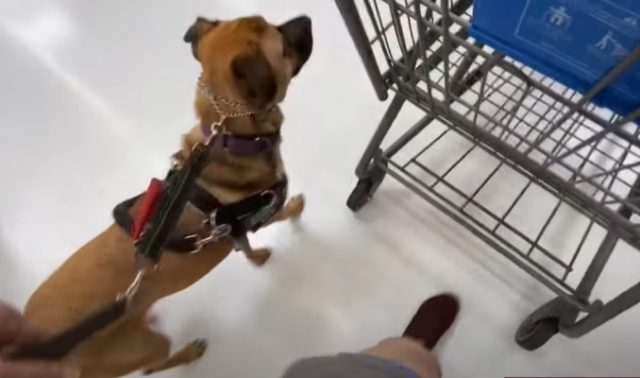 As the man rounds the corner, his muffled voice is heard saying his dog is not a pet, but Dominique doesn’t believe it. “That is a pet, the way it’s behaving. [Service animals] don’t whine,” she is heard telling the man.

At that, he pops back around the corner to face Dominique and tell her that he’s a disabled vet. “I’m not saying you’re not disabled,” the woman interjects, to which the man responds by throwing up a hand and telling her to “stop the sh*t.”

Dominique says in an assertive tone before explaining:

“Don’t speak to me like that! I’m not saying you are not disabled. What I am saying is that you cannot have another dog in here, whining at another service animal.”

She then shouts in his direction as others come to her defense as she praises Mya for her obedient behavior:

“You’re not the only one with PTSD in here!” 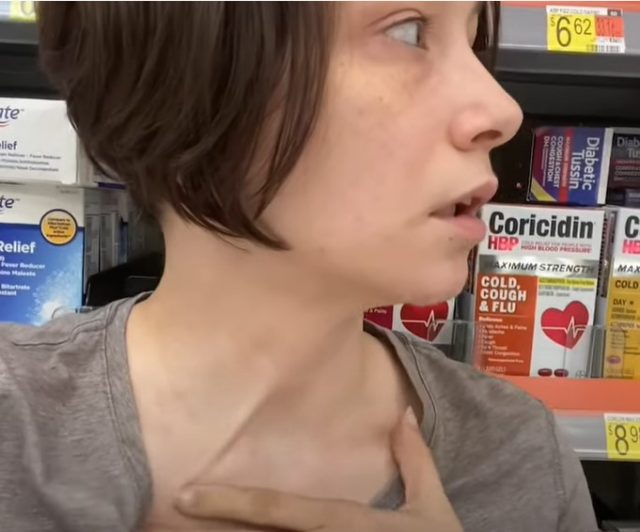 Read more of this story from Taphaps:

Left “shaken” by the encounter, Dominique — who says her husband is a veteran too — flips the camera to her face to explain her issues to viewers as she waits with Mya after the man and his dog have once again come into their view, this time from behind. Sitting on the floor, apparently waiting for the man and his dog to move away, Dominique admits she’s anxious and doesn’t want to “run into them” again.

“You can be disabled and qualify for a service dog, but your dog still has to be trained,” Dominique says while looking into the camera, explaining why she was so upset. “That dog was not trained,” she adds, saying that there are “certain things you can look out for to tell if it’s a ‘fake’ service dog or not” or whether the dog is in training. “It wasn’t getting any corrections,” she points out, admitting that Mya is in training and if she had acted the way the man’s dog was behaving, corrections and commands would have been given to redirect her.

Dominique goes on to explain that she and Mya have run into other allegedly fake service dogs in the past, and they have been doing a lot of training — training this man obviously wasn’t doing with his alleged service animal. “If you have an in-training dog, you’re going to correct it when it does behavior unwanted,” she says, adding that the man wasn’t doing any of this as his dog allegedly whined and pulled on the leash. “There were no corrections being given, which shows me that it’s not even in training,” she concludes.

“State and local laws generally prohibit animals in grocery stores,” where “food is prepared, stored and sold,” because “the presence of an animal could pose a sanitation risk,” according to Chron. There are, however, exceptions for service dogs. It’s up to the store and staff to enforce the health and sanitation laws while also making necessary accommodations for service animals. Unfortunately, according to the outlet, “there is some confusion about what qualifies as a service animal.”

The confusion often centers on the differences between a service animal and an emotional support animal. Although the federal Americans with Disabilities Act (ADA) requires that all business owners, including grocery store owners, allow service dogs in their facilities, the same is not true for patrons who have emotional support animals.

This confusion will occasionally “cause ill will between store owners and customers” — or in this case, between customers. According to the ADA, a service animal is a dog that has undergone specialized training to perform specific tasks for its handlers, so Dominique was seemingly right to question whether or not the animal, which didn’t appear well trained, was legally permitted to be in the store. But, was it her place to address it?

Most commenters seemed to support Dominique’s efforts to raise awareness, offering words of encouragement and support. However, there is no way to know whether comments that disagreed with her tactics were removed. Perhaps another option would have been to contact store staff to address the issue and provide them with education. Either way, most agree that the issue needed to be addressed, especially since many have taken advantage of the service animals exception in order to take their pets into public places, causing problems.

According to commenters, when management is approached about suspected “fake” service animals, they often say there’s nothing they can do. Indeed, there is no way for most of us to know with certainty whether this man’s dog was able to perform specialized tasks that will help him with his disability. Dominique seems to think she can tell due to her training. As for the rest of us, wouldn’t it be nice if we lived in a society where we didn’t have to wonder if people were lying just to get their way?

She Complained About Having Too Much White Privilege, What Happened Next Was…

He Did Not Notice It When He Snapped The Photo, But When He Got Home And Uploaded It To Reddit, CHILLS RAN DOWN HIS SPINE!!

PAUL RYAN Has ONCE AGAIN Reared His Ugly Head To Spread More Lies!