Skip to content
Home>Uncategorized>Why One Hospital CLOSED Their ICU Is Absolutely Heartbreaking!

Biden’s forced vaccination mandates spread like a virus and instead of being helpful – it turns out to be a total disaster.

Recently, the surge for new Covid-19 cases is hitting the charts faster than how we imagined. It makes me think if the vaccines really working as advertised by Joe.

The worst part is that vaccines are supposedly going to protect us from COVID, but what is happening right now is it’s becoming a reason for most Americans to lose their jobs…including the health workers.

The administrators of Central Maine Healthcare in Lewiston, Maine, enacted a vax policy demanding all employees to take the vaccine. But more than 250 employees refused to comply before the deadline. These employees were subsequently fired.

Unfortunately for patients, about 170 of those employees were needed to staff the intensive care unit. Consequently, the hospital had to shut down its ICU because of the firings.

Because it lost so many employees, the hospital plans on cutting intensive care beds by 50% and reducing the number of medical-surgical beds by 40%, the Bangor Daily News reported.

Other healthcare companies in Maine have also quit their jobs.

MaineHealth said 69 staffers resigned, Central Maine Healthcare reported 70 resignations at the time and 500 open positions at the hospital, and another 89 staffers left at Northern Light Health over their refusal to take the vax.

Many netizens have shared their honest opinions about the real-deal situation effect of the so-called mandate.

Maine Hospital Fired So Many Unvaxed Employees They Had to Close the ICU ⋆ A hospital in Maine fired so many of its employees for being unvaccinated that the place was forced to close its ICU. ⋆ Flag And Cross https://t.co/Zv8ez8nf9h

On the other hand, Bangor Daily News provided additional details:

The plan at Central Maine Medical Center is spurring local lawmakers to call on Mills to provide a testing opt-out to the mandate, something the Democratic governor has resisted so far. The hospital confirmed the worst-case scenario on Friday, saying 250 employees have no vaccination record with the hospital and 170 of them deal directly with patients.

The situation is one of the direst outlined at a Maine hospital during the COVID-19 pandemic. It also presents a dire situation in Androscoggin County, where 58 percent of the population has had its final COVID-19 dose, according to state data. The hospital is in Maine’s second-largest city and caters to most of the region.

“We continue to work very closely with our as yet unvaccinated team members by giving them all the information they need to make an affirmative decision to receive the vaccine,” said Ann Kim, a spokesperson for Central Maine Healthcare, the hospital’s parent.

Maine Senate Minority Leader Jeff Timberlake, R-Turner, and Sen. Ned Claxton, D-Auburn, who were on a Friday call with hospital leaders, said members of the regional delegation are planning to petition Mills to consider a testing option for unvaccinated workers and to explore ways to provide aid to the hospital ahead of the deadline. They are also likely to ask Mills to consider deploying the Maine National Guard to bolster staffing.

Fauci’s Family: Connection To Social Media Giant Has Been EXPOSED! 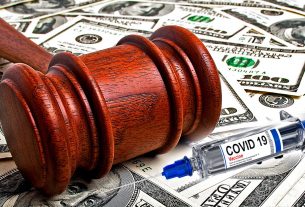