Skip to content
Home>Uncategorized>A Good Guy With A Gun Saw A Gas Station Being Robbed, What He Did Will….

This is another story of a good guy with a gun who shoots and kills a bad guy on a “violent crime spree.”

Quick thinking by a witness of an armed robbery halted a violent crime spree by a 26-year-old man from St. Louis, Missouri.

The knife-wielding man first committed an armed robbery at an open gas station in St. Charles, Missouri, before fleeing and committing a burglary at a closed gas station.

After moving on from that location, he then went to another gas station, which was open, where he attempted another armed robbery.

At that gas station, however, the suspect faced resistance in the form of the witness who shot him dead after he advanced on him.

Of course, the media and the left are not talking about this hero, because they prefer it when mass shooters succeed so they can politicize deaths and push gun control. But the fact of the matter is that law-abiding Americans who are armed are our greatest hope against the bad guys out there.

More details of this good guy with the gun saving the day from the Western Journal report:

A customer with a concealed firearm witnessed the robber’s actions at the QuikTrip store.

According to KTVI, the customer told police he had stopped in at the store to use the restroom and make a purchase. As he was returning to to his vehicle in the parking lot, he saw a black SUV pull up directly in front of the store’s door, without using a parking space.

He said he saw the driver of the SUV enter the store carrying a backpack, then accost the clerk, dragging her from the coffee pot area to the store’s front counter, according to KTVI. The woman was screaming, he said.

The customer’s intereview with KDSK is below. The customer is not identified because, he told the station, he fears retaliation for his actions:

“I walked up to the door and I saw him with a knife to her throat. She was emptying out the cash register and I took a step in and peeked my head in to ask if everything was OK,” he told KDSK.

“I pulled my gun up and I asked him, ‘are you sure everything’s OK?’ And that’s when the suspect said, ‘no, it’s not OK, but I got something for you,’ and he grabbed his bag, ran from around the counter and started running towards me and that’s when I fired shots.”

When police arrived at the scene, they found the wounded man, according to reporting from KMOV-TV. Bush was taken to a hospital, where he would later die of his wounds.

The customer who shot him was still at the scene when police arrived, KSDK-TV reported. 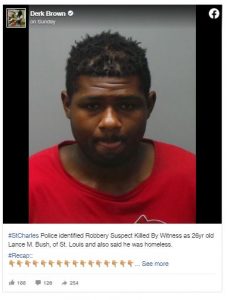 The St. Charles Police Department reported that they will not release the hero’s name until after prosecutors decide if his use of deadly force was lawful in this situation.
They also refused to release any store surveillance footage of the crime spree Bush is accused of committing while they are continuing their investigation.
Watch the video report here: KSDK News/Youtube
Sources: WayneDupree, Western Journal, KTVI-TV

Another Nation Has Suspended Their COVID Vaccine Mandate!

Why Did Maricopa County Demand All Those BLACK MARKERS On Election Day!