Skip to content
Home>Uncategorized>A New Poll Revealed That 2022 Is A Lock For The GOP!

The people have spoken, Democrats are indeed full useless politicians.

In a recent poll made by Gallup, more Americans feel that Republicans are better than Democrats when it comes to national security and the economy.

According to the poll, 54% of respondents said the GOP would do a better job protecting the country from international terrorism and military threats in the next several years, while 39% said the Democratic Party.

More people chose the Republican Party (50%) than the Democratic Party (41%), as for which party will do a better job of keeping the country prosperous.

People who answered “No difference” between the parties received the remaining percentages on both questions.

Republicans had a narrow advantage on international matters while the parties essentially were tied on economic matters last year before progressives took control of the White House and Senate.

When it comes to national security matters, the Republican Party is usually thought to be more capable, but the GOP’s 15-point advantage is the highest since a 16-point advantage in 2015. In 2014, the party held a 23-point lead.

The GOP has had at least a small advantage when it comes to keeping the country prosperous for most of the past decade. The only years since 2010 that Republicans have not led were 2012 and 2020, two years in which Democrats were elected president.

The last time at least half of U.S. adults said the Republicans were better at keeping the country prosperous was in 1989.

Gallup found that Republicans hold slight advantage — 41% to the Democratic Party’s 38% — when it comes to which party can better handle the most important issue, whatever it is determined to be, facing the country.

That was a significant change from last year when 47% said the Democratic Party was better than the Republican Party (39%) at addressing the most important problem.

The coronavirus pandemic or the government itself are most commonly named as the most important problem right now. Last year, race relations also was cited.

Not all news was positive for Republicans, Gallup said.

“Despite these issue advantages, the Democratic Party still maintains a slight edge in overall favorability, as it has for nearly all of the past decade even as the GOP has typically led on these issue measures,” Gallup said. “These results, therefore, suggest the Republican Party has not been able to translate its competence edge on key issues to a more positive image of the party overall.”

While Masks Are Off Everywhere Else, Biden Is Forcing Airplanes To Keep Them On! 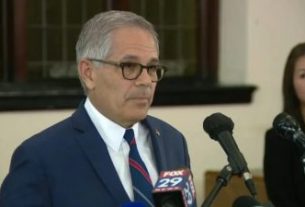 A Top Liberal Official Has Finally Been Impeached!

She Saw A Student Crying About Her Dad, What She Did Next Is Life Changing!