Skip to content
Home>Uncategorized>ALERT: State Getting Ready To RELEASE THOUSANDS OF VIOLENT CRIMINALS Due To “COVID”.

One time, many years ago, my wife and I had the opportunity to buy a house that was two blocks away from the entrance to a prison. We declined.

The reason why is simple, we know that if someone were ever to break out of there that our car would likely get stolen given the proximity of our house from the front gate.

Now, I agree with the fact that things have to change a little bit to deal with COVID. Also, I think that we shouldn’t make concessions for people who had no regard for another’s life.

People should not be getting out of prison early if they hurt someone. End of story.

California is dealing with the devastating effects of the coronavirus pandemic. In an effort to reduce the number of people who die from COVID-19, California officials are proposing to release up to 17,600 inmates early to help slow the spread of the virus within the prison system. So far, California has released thousands of inmates, including 3,500 in April and another 6,900 in June.

Additional convicts who may be released including 700 offenders who have less than a year left to serve as well as 6,500 who were previously classified as “high risk” by the Federal Receiver. In a filing last week, officials estimated that they would release about 17,600 inmates to help slow the spread of the virus after previously estimating the release of just 10,400 inmates – a more than 69 percent increase in the number of inmates who may be released back onto the California streets.

“This is not a blanket release, the point-in-time numbers are just a step in the review process as the department works tirelessly to conduct these releases in a way that aligns public health and public safety,” a CDRC spokesperson told Fox News.

Although activists are pushing for prison officials to release non-violent inmates to prevent the spread of the coronavirus, Corrections Secretary Ralph Diaz hopes to block thousands of the proposed. Diaz hopes to identify at least 5,500 inmates who should not be released due to various details, including the fact that some are serving life sentences.

One of the more than ten thousand prisoners released was Terebea Williams, 44. She served 19 years of an 84-years-to-life sentence for a conviction of first-degree murder. Williams was convicted of murdering Kevin “John” Ruska while he was driving her to work. An argument arose, and she forced him into the trunk. When he resisted, she shot him. Then she drove hundreds of miles from Washington to California, where he died after the gunshot wound became infected.

Prisons and jails quickly spread the coronavirus because correctional facilities are unable to help inmates maintain proper physical distance. Not only are the inmates affected, but correctional officers can also contract the virus and bring it home to their families. Because of this threat, more than 100,000 inmates have been released across the United States. Most of them have not caused any problems. But a few of them have committed crimes and made the decision look bad.

A study led by the reputable John Hopkins Bloomberg School of Public Health found that the coronavirus spread 505 times faster inside prisons versus outside of them. 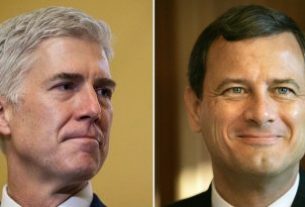 The Supreme Court Just Made A HUGE Ruling About The EPA!

BIDEN Planning To UNDO EVERYTHING On Day One!