When CNN contributor Kate Anderson Brower wrote a critical piece about Melania Trump, slamming her for an interview she gave to Fox News, the First Lady’s spokeswoman fired back. Stephanie Grisham, Trump’s deputy chief of staff for communications, wrote a guest op-ed for CNN’s website in response, noting Brower’s “unnecessary attack” on Mrs. Trump, saying that she was “condescending” to the First Lady.

In part, Brower had remarked that when Trump sat down for an interview earlier in the week with Sean Hannity she “proved that doesn’t understand what it means to be first lady,” as Trump had told Hannity that “opportunists who are using my name” were the hardest part about the position.

According to Brower, she found that Trump was “again making the job about herself and her family instead of taking the opportunity to talk about the challenges she sees other people facing.”

Brower wrote: “The entire moment was a lost opportunity to put attention on the families of struggling Americans she’s met in her role as first lady, especially since she spent time the very next day reading to children at Children’s National Hospital, some sitting in wheelchairs with IVs attached. And the Hannity interview took place on USS George H.W. Bush, a trip the first lady made to support members of the military and their families.” 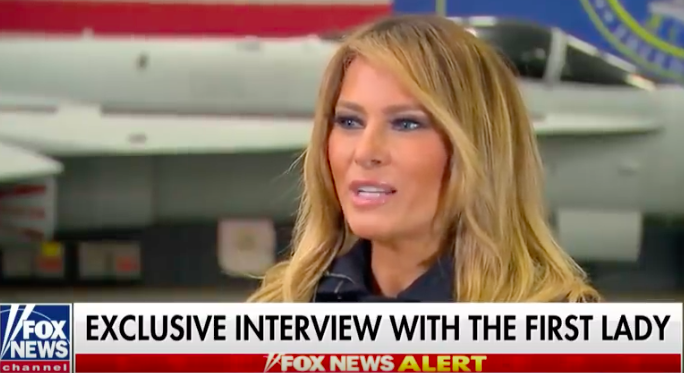 Further, she noted: “Wouldn’t it have been heartening to hear her use that moment during the interview to talk about the women and babies she’s met struggling with opioid addiction or the children who she has met as part of her ‘Be Best’ campaign who have been bullied at school or the people whose homes were destroyed in the California fires?”

In response, Grisham noted that Brower had published her article “hours after the First Lady traveled to Children’s National Hospital in Washington to read a Christmas story, visit sick children and thank the hardworking hospital staff.”

Additionally, the First Lady’s spokesperson took the opportunity to fire off at the press for “consistently ignoring the First Lady’s work on behalf of the people of this country, and children in particular, in favor of more trivial matters.”

Further, Grisham explained: “For Brower to claim that Mrs. Trump’s interview was ‘a lost opportunity to put attention on families of struggling Americans she’s met in her role as first lady’ is to willfully ignore everything she has actually done to help and support children and families across the globe as a commitment to service she has consistently demonstrated over the past two years.”

Grisham pointed to the outreach the First Lady has been involved with, including visiting hospitals, traveling to areas impacted by hurricanes “to support recovery efforts,” as well as her attention given as she “comforted shooting victims in Las Vegas, Parkland and Pittsburgh, and thanked law enforcement personnel and first responders for their heroic efforts during times of national tragedy.”

Additionally, Grisham noted that “News personalities and outlets use the ‘Be Best’ hashtag to taunt her about her husband, instead of focusing on the underlying message of kindness and compassion the campaign is intended to convey.”