Over fifty House Republicans are sounding the alarm on Joe Biden’s mental capabilities, stressing that he is not fit to run the country.

Texas Republican Rep. Ronny Jackson is renewing his calls for  Biden to take a cognitive test  “immediately”, and 53 Republican lawmakers are joining.

Joe Biden won’t finish his term. Democrats KNOW his cognitive decline is a liability. He needs to quit waiting and get it over with. RESIGN NOW!

“We are worried bout your mental abilities,” says the letter, the third such letter that has been sent to Biden since he took office. He’s refused to respond to the first two.

Well, when Democrats called on President Trump to take one, not only did he do it, he aced it. Why can’t Biden do the same?

The letter explains further that all presidents, “regardless of gender, age, or political party,” should follow the example set by President Trump and “document and demonstrate sound mental abilities.”

That was not documented, the letter explained, during a recent annual physical for Biden.

More details of this report from FOX News:

More than 50 House Republicans on Wednesday are calling for President Biden to take a cognitive test, as the president’s opponents, and even some allies, question his fitness for the job at age 79.

Fifty-four Republicans signed the letter, addressed to President Biden, which was led by Rep. Ronny Jackson, R-Texas. That’s up from 13 co-signers on a similar letter Jackson led in June 2021, and 37 co-signers on a letter in February.

“We again write to you to express concern with your current cognitive state and to urge you to submit to a cognitive test immediately. We believe that, regardless of gender, age, or political party, all Presidents should follow the example set by former President Trump to document and demonstrate sound mental abilities,” the letter says.

“While you have largely brushed aside these assertions as partisan political attacks, the left-leaning New York Times recently published an article outlining all of this in great detail,” the letter continues. “According to The New York Times, the increased scrutiny surrounding your cognitive state has been fueled by your recent public appearances.”

More recently, Biden has made headlines again because he seemingly has lost the need to blink. This video demonstrates how he doesn’t blink as a typical person does.

“You can’t be pro-insurrection and pro-American.” —@JoeBiden pic.twitter.com/ufJxWPruj4

That doesn’t look well, Biden should take the test or resign. 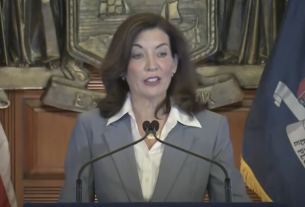 Hateful Dem Just Raised The Age To Buy A Gun…

Nebraska Just Told Sleepy Joe To Take His Crooked Plan And CRAM IT!