The Federal Election Commission (FEC) has slapped the Democratic National Committee and Hillary Clinton’s 2016 campaign with thousands of dollars in Fine over an investigation into alleged misreporting of spending related to the now-infamous Steele dossier.

FEC fined Clinton’s campaign $8,000 and the DNC $105,000 for failing to properly report money spent on research for the dossier. The financial penalties came to light in a letter the FEC sent to the Coolidge Reagan Foundation, a conservative group, after it filed a complaint.

Hillary thought she can get away with her crimes that easily…

Now, President Trump has a perfect statement for Hillary Clinton celebrating the agreement and once again slamming the dossier as “a Hoax funded by the DNC and the Clinton Campaign.”

Here’s what Trump said in a statement:

“This was done to create, as I have stated many times, and is now confirmed, a hoax funded by the DNC and the Clinton Campaign. This corruption is only beginning to be revealed, is un-American, and must never be allowed to happen again. Where do I go to get my reputation back?”

Last Thursday, President Trump filed a federal RICO suit in Miami, Florida against Hillary Clinton and others over the Russia collusion hoax orchestrated by the Clinton campaign in 2016 to undermine Trump’s candidacy and derail his presidency.

And more than $24 million worth of punitive damages for expenses and losses were the asking price of President Trump. 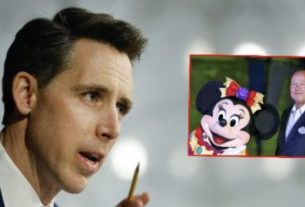 Senator Hawley Just Took The Disney Fight To The Next Level!

The Walls Are Closing In On Crooked Chris Cuomo!