Skip to content
Home>Uncategorized>He Sought Out Simple Marriage Advice And Ended Up Dead!

A bridegroom has been killed with an axe after an occult ritual ended in a violent argument.

After his wife Lyubov, 29, left him less than a year after their wedding, Anton Shabanov, 33, a Russian engineer, turned to black magic in order in order to save his marriage, but things turned out violently. 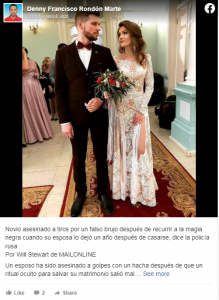 According to a friend the couple was split up and had been living separately.

But Shabanov was desperate to win his wife back. He enlisted the support of a convicted fraudster.

The Russian Investigative Committee reported that, Nikolay Ivanov, 32 a convicted fraudster, whom was asked to perform a ritual that involved burying the couple’s possessions in a forest near Astrakhan, as they performed the ritual, Ivanov mocked the other man and insulted his estranged wife, a court heard.

A fight ensued, and Ivanov used an axe to strike multiple blows to the groom’s head and neck, killing him. 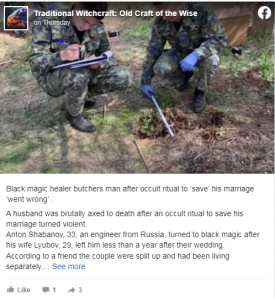 A committee reviewing the case later said, “The court established that a local resident, wishing to restore relations with his wife, decided to resort to an occult ritual.”

“To perform the ceremony, he needed to bury their personal belongings in a deserted place outside the city.”

At some point, Ivanov allegedly clocked Shabanov in the head and neck with an axe, killing him. After covering the body with branches, he fled.

Ivanov later confessed to the murder when caught by police, was sentenced to nine and a half years in prison, and was fined over $27,000 in damages.

The Privolzhsky District Court in Astrakhan determined that Ivanov’s time would be served at a “strict regime” labor camp.

Shabanov’s decision to turn to black magic surprised a friend of his, who said he’d known the man was sad about the separation but didn’t seem the type to turn to such methods.

“Naturally he was upset, but I cannot imagine he would be involved in rites to bring her back, “ the friend told Russia’s 360TV, according to the Sun.

Some commenters have said that nothing will drive a person crazy like having a broken heart, and others suggested that if the man was willing to involve the occult, perhaps the estranged wife was right to leave.

Either way, if you have a problem that needs to be solved, as a general rule it’s probably best to go about solving that problem without involving either the dark arts or conmen.”

Mike Lindell Has Just Made His Biggest Announcement Yet!

Yet Another Idiot Dem Mayor Has Made A Career Ending Move!

What Hunter Biden Said About His Crooked Art Sale Is Absolutely Sickening!