Skip to content
Home>Uncategorized>He Tried To Frame Trump Supporters, This Hack Actor Is About To Face The Music!

Sometimes you just need to chill and let karma works…

Two men wearing MAGA hats (Trump’s signature – Make America Great Again) were wrongly accused by this black actor Jussie Smollett who reported the incident back in January 2019 to the Police.

The actor said that he has had been brutally assaulted by them, they tied a rope around his neck and screamed homophobic slurs at him.

Smollett’s story was later revealed to be an acting job orchestrated by the gay, black actor upon further investigation, in order to portray Trump supporters as racist homophobes.

On February 20, 2019, video footage of the brothers buying masks and hats that were allegedly used in Smollett’s fake hate crime began to spread on social media, It wasn’t long until two Nigerian brothers who worked out with the star revealed their involvement in the fake hoax.

The angry, black, gay Democrat actor only provided further evidence that liberalism is a mental condition in his desperation to create a false narrative designed to marginalize Trump supporters.

Johnson told reporters, during his press conference, “Empire actor Jussie Smollett took advantage of the pain and anger of racism to promote his career.” Why would anyone, especially an African American man, use the symbolism of a noose to make false accusations?” The Chicago Police chief asked.

After being approached by Tina Tchen, a former chief of staff to first lady Michelle Obama, Cook County state’s attorney Kim Foxx asked police Superintendent Eddie Johnson to turn over the case to the FBI, according to the Chicago Tribune.

Why would Michelle Obama’s former chief of staff approach Foxx to get the case turned over to the FBI? Was the FBI going to “handle” this case for the former first lady in order to get Smollett off?

“Shortly after Mr. Smollett reported he was attacked, as a family friend, I contacted Cook County State’s Attorney Kim Foxx, who I also know from prior work together. My sole activity was to put the chief prosecutor in the case in touch with an alleged victim’s family who had concerns about how the investigation was being characterized in public.”

“He did not ask for any of this,” she said. “He was a victim of a crime. This has completely spiraled out of control and become a political event at this point, and his goal and focus right now is just getting his life back on track. He has not even started healing from the initial attack because he’s been dealing with everything that has happened since then. I don’t know. I mean, we’re shocked at the mayor and the police superintendent doubling down yesterday when the prosecutor after a dispassionate look at the evidence realized it does not hold up and chose to voluntarily dismiss all counts and expunge his record so we’ll weigh our options and see how this develops.”

The texts and emails below are from our previous report on the Smollet scam. The contact between Foxx and Tchan tells a different story than the one the dishonest media was reporting:

Foxx reached out to Johnson after Tina Tchen, former chief of staff to first lady Michelle Obama, emailed Foxx saying the actor’s family had unspecified “concerns about the investigation.”

A personal friend of Mayor Rahm Emanuel’s wife, Tchen, claimed to be speaking for the “Empire” actor and his family. Foxx later exchanged texts with a relative.

Foxx wrote, Spoke to Superintendent Johnson. I convinced him to reach out to FBI to ask that they take over the investigation,” In an email sent just two days after Smollett falsely claimed he was jumped by a pair of Trump-supporting bigots, Foxx reached out to Tchen to let her know that she had contacted Johnson, as the Obama alumnus had previously requested.

Tchen wrote in response to a text message from Foxx containing the same information as was included in the email, “OMG this would be a huge victory.”

Foxx responded, “I make no guarantees, but I’m trying.”

The National Review  – The Chicago Fraternal Order of Police has requested that the Department of Justice open an investigation into Cook County state’s attorney Kim Foxx’s handling of the Jussie Smollett hate-crime-hoax case.

After the series of communications, the FBI never took control of the investigation, which resulted in Smollett’s being charged with disorderly conduct.  Fraternal Order of Police President Kevin Graham believes Foxx should be investigated for trying to interfere in the investigation.

Graham wrote in a letter sent Friday to John R. Lausch, the U.S. attorney in Chicago, obtained by CWBChicago, “Private attorneys are not allowed to interfere with ongoing police investigations, particularly at the request of private individuals associated with subjects being investigated by the police.”

Meanwhile, Empire actor and hate crime hoaxer, Jussie Smollett continued to promote his fake hate hoax, using the very willing Good Morning America host Robin Roberts to aid him in his efforts to characterize Trump supporters as racists and homophobes. “I am not weak,” a tearful Smollett explained the details of the fake hate crime that was allegedly orchestrated by him.

“There’s a level of pride there.” @JussieSmollett says he waited to call police because as a gay man, he did not want to be seen as “weak.” https://t.co/b5efiP0JCG pic.twitter.com/zosV9Ni78H

Smollett’s sister, Jurnee Smollett, who once worked for Barack Obama

You are not weak. You are brave. One of the bravest I know. Speaking your truth, a person living at the intersection of multiple identities, unapologetically, takes courage. I love you

You are not weak. You are brave. One of the bravest I know. Speaking your truth, a person living at the intersection of multiple identities, unapologetically, takes courage. I love you ❤️❤️❤️ https://t.co/3Ynylf35BM

Hate crime hoaxer Jussie Smollett’s sister, Jurnee, an actress in the WGN-TV series “Underground,’ told Ebony magazine, that the wound of slavery have not been healed, “we see that the wounds that we all as a nation inflicted upon our brothers and sisters during slavery have not been healed,” Smollett-Bell said, reflecting on the current political climate. “There’s still a really divisive residue in our nation that’s called racism and prejudice and oppression and sexism.”

She said that although she doesn’t want to give Trump “the credit of stirring us up,” his rise is a “call to action,” particularly for those who might have gotten “a little relaxed” during former President Barack Obama’s tenure.

“Honestly, I have so much hope for all of us,” said Smollett-Bell, who served as a surrogate for Obama’s 2008 and 2012 campaigns. “We are being called to action, and I really see a movement of love, a movement of positivity really gaining so much momentum. If anything, that’s what I want to focus my energy on.”

Here’s Jurnee Smollett Bell’s Instagram post where she confirms that she worked for Barack Obama’s campaign. Much of her Instagram account is dedicated to hating Donald Trump and for promoting Black power and transgenders.

Hate hoaxer Jussie Smollett was no stranger to the Obama’s either. This selfie was taken on his 2016 visit to the White House.

With @leonbridges & @ddlovato about to meet president @BarackObama. Lord don’t let me shame myself and my family.🙏🏿 pic.twitter.com/NQcjCBa3s0

Smollett can be seen laughing with the first lady during another White House visit here.

Smollett also found himself on stage with Michelle Obama in March 2016, as the first lady shook her bootie for the crowd, while Smollett sang on stage to promote black kids going to college.

Smollett was also asked to sing for the Obama’s on the eve the Obama’s celebrated themselves, with a final extravagant gala, that included black guests and black entertainers.

With my big bro Jojo, @MichelleObama & @BarackObama back when the White House was the Kingdom of Wakanda…🙌🏿😩🙅🏾‍♂️🙅🏾‍♀️🙅🏾‍♂️🙅🏾‍♂️ pic.twitter.com/8VymkBAZ5k

It’s curious how the former first family, who appears to have close ties with the Smollett family, has remained silent on the “attempted lynching” and “hate crime” committed against their good friend Jussie Smollett.  The Obama’s silence on the “hate crime” committed against their friend is especially curious, given that the “attack” by “white MAGA hat” wearing men took place in their hometown of Chicago.

Americans were shocked when it was announced that all charges had been dropped in the ‘Empire’ actor Jussie Smollett hate-crime hoax case. During their press conference to discuss the Smollett case, Chicago Mayor Rahm Emanuel and Chicago Police Department Supt. Eddie Johnson openly admitted they were blind-sided by the announcement by the announcement that came from Chicago Prosecutor Kim Foxx’s office.

Now it’s being reported by AP that Actor Jussie Smollett is being charged with 6 new crimes related to lying to the Chicago Police.

Smollett was indicted Tuesday for a second time on charges of lying to police about a racist and anti-gay attack he allegedly staged on himself in downtown Chicago, renewing a divisive criminal case that drew worldwide attention last year.

The indictment came from a special prosecutor who was appointed after Cook County prosecutors dropped the same charges last March.

The new charges were sure to reignite many of the tensions that surrounded Smollett a year ago. When his claims first emerged, he drew a groundswell of support from fans and celebrities and gave an emotional television interview about the attack.

The case came to reflect the polarized state of political discourse in America. Many Democrats initially called it a shocking instance of Trump-era racism and hate, while Republicans depicted it as yet another example of liberals rushing to judgment and disparaging the president’s supporters as bigots.

Special prosecutor Dan Webb said in a statement that Smollett faces six felony counts of disorderly conduct, charges that stem from four separate false reports that he gave to police in which he contended he was a victim of a hate crime “knowing that he was not the victim of a crime.”

The statement immediately raised questions about county prosecutors’ decision to drop the charges and made it clear that those prosecutors had not adequately explained to special prosecutors why they did so. But Webb stressed that he had reached no conclusions about whether anyone involved in the case had engaged in any wrongdoing.

Smollett, who is black and gay, was originally charged with disorderly conduct in February 2019 for allegedly staging the attack and lying about it to investigators. The allegations were dropped the following month with little explanation, angering police officials and then-Mayor Rahm Emanuel. 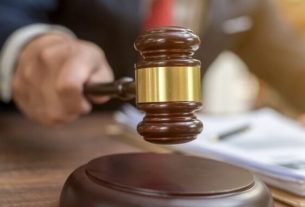