Skip to content
Home>Uncategorized>He Walked Up To The Emergency Exit, What He Did Next Had Everyone In Shock!

Passengers of American Airlines were shocked after they found out one man climbed onto the wing of the plane as it taxied on the runway.

Police investigating the bizarre incident said that a 33-year-old Christian Segura was arrested in Miami after he allegedly opened the door of a plane and jumped onto the wing as it arrived at the gate.

It all started when the plane landed in Miami and was taxiing to the terminal at Miami International Airport. By the time the airplane reached the terminal, the man was out on the wing risking his life with every second he spent there.

According to Local 10 News:

The flight from Colombia to Miami had just landed at about 7:16 p.m. Wednesday when police allege Christian Segura, 33, opened the emergency exit door and climbed onto the wing of the plane.

When police arrived on the scene at Miami International Airport, Segura jumped off the wing and was detained by ​​U.S. Customs and Border Protection before being transferred into the custody of the Miami-Dade Police Department. 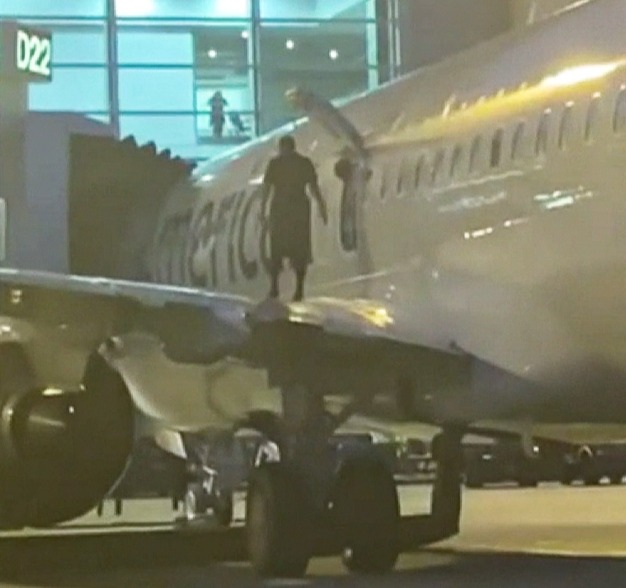 “The customer was immediately detained by law enforcement. We thank our team members and law enforcement for their professionalism and quick action.”

“When we landed, there was a person that jumped onto our wing,” passenger Alex Lavet told WSVN-TV. “I was sitting right on the wing looking out, and I see a guy had jumped onto the plane’s wing, running on it with no shoes.”

“And then these two people end up climbing onto our like floor area of the plane,” said passenger Krista Rosolino. “They were yelling at him, and my husband was like, ‘I’m a doctor, let me through!’”

Segura was brought to Jackson Memorial Hospital after stating he didn’t feel well, and police said his blood pressure was determined to be high. He was brought to jail upon being released from the hospital in stable condition.

“While customers were exiting the plane at the gate, a passenger opened the over-wing emergency exit and jumped onto the ramp. The customer was immediately detained by law enforcement officials. All other customers deplaned normally. We thank our team members for their professionalism and apologize to our customers for the inconvenience.”

Segura now faces charges of criminal mischief, trespassing, and resisting arrest. Passengers were shocked by the incident, but no one was injured in the process.

NFL Stars Are Making A HUGE Stand Against The Vaccine!

ALERT!!!: ISIS Message Reveals CHILLING Plans They Have In Store For 4th Of July