Skip to content
Home>Uncategorized>Matt Gaetz Has DEMANDED That They All Come Clean!

Congressman Matt Gaetz is calling FBI Director Christopher Wray to thoroughly reveal any roles the FBI had in instigating the “riots” on January 6th.

Tucker Carlson previously opened his skepticism on the mainstream narrative of what happened that fateful day, also reported on by 100 Percent Fed Up.

In a stunning revelation that our media and tech overlords are working tirelessly to silence, Fox News host and Paleoconservative icon Tucker Carlson discussed the hundreds of arrests that were made in conjunction with the January 6th incident on his top-rated show this past Tuesday. During his time slot, Carlson postulated that many of the ring leaders were FBI agents who spearheaded the push to storm the Capitol Building.

Tucker Carlson, who calls the ring leaders of the Capitol incident ‘unindicted co-conspirators’ per court documents, made the claim that said ring leaders were, in fact, federal agents who played an indispensable role in orchestrating the escalation on January 6th, without which that day would have been marked by a purely peaceful demonstration. Indeed, as reported in a previous article yesterday, “The latest video to emerge shows the crowd being shown the door into the building as law enforcement officers stood to the side, allowing them to freely pass by. One of the law enforcement officers can be heard telling the protesters, “I disagree with you, but I respect you!” as the group walked unobstructed through the hallway of the Capitol building.”

Indeed, in the aftermath of the incident, over two thousand criminal charges were levied against a total of 411 individuals. These charges included but were not limited to hundreds of felonies like trespassing with a weapon and assaulting law enforcement.

Tucker Carlson went on to mention that this sinister conspiracy might well be the reason behind the yet unreleased ten THOUSAND hours of video footage from the Capitol and why authorities continue to keep the footage beyond the public domain. He also impressed a sense of skepticism on his viewership as to why the officer who slew Ashli Babbitt was not even named, given the media’s insatiable propensity to not only name police officers but also to reveal their racial identity vis-a-vis their supposed victims whenever it fits the manufactured narrative. 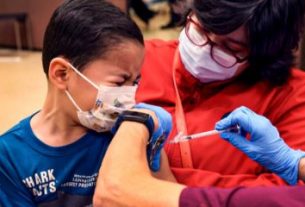 What The President Of Pfizer Just Said About The Vaccine Is Absolutely….

BREAKING: They Just THREW OUT 15 Million Doses Of The COVID Vaccine!