On Wednesday, the American Truckers have officially started an 11-day journey from California to Washington, DC.

The “People’s Convoy” is an American version of Canada’s “Freedom Convoy”, which traveled from Western Canada to the capital city of Ottawa. Hundreds of vehicles and thousands of protesters effectively took over downtown Ottawa for three weeks which is a huge success.

Going back to the DC Swamp, they continue to scramble in preparation for the massive protest that will be arriving over the next few days.

Bob Bolus, the owner of a Pennsylvania trucking company and the organizer of the convoy together with a group of 30 or so vehicles have left Scranton on Tuesday to kick the protests off and send a message to Lawmakers that we aren’t waiting around anymore – the people are fed-up.

Bolus said in a statement:

“We’re the tip of the arrow right now. It’s taken out rights. It’s taken everything America stands for. We’re just simply saying, the rights they took, to simply reinstate them.”

Now the fake news media are busy twisting the story, they even fly their press helicopter just to watch the “People’s Convoy” movements as it got closer.

In the coming days, I’m pretty sure things will get really interesting once more protesters come to DC. After all, like Bolus said, this is just a “prelude” – the fake news media will be kicked into full overdrive.

The Gateway Pundit has more of this story:

Several other groups of truckers from all areas of the country are also planning on arriving throughout the week in order to form a massive demonstration similar to the one recently seen in Ottawa.

Just hours before the first trucks began arriving in Washington, DC, ‘the People’s Convoy’ kicked off its journey from California to the Nation’s Capital in stunning fashion, with thousands of people showing up to send them on their way.

Videos from the send-off event show countless cars parked and lined up around Adelanto Stadium in California. Supporters brought food, drinks, and essentials for the convoy participants to ensure they had everything needed for the upcoming standoff.

Hat/Tip to independent journalist Brendan Gutenschwager was on the scene and documented everything.

Adelanto, California: Several hundred vehicles out this morning as ‘The People’s Convoy’ to DC gathers outside Adelanto Stadium pic.twitter.com/lqyy7oXnFQ

Over a thousand vehicles are now outside Adelanto Stadium, as ‘The People’s Convoy’ towards Washington DC prepares to depart from California pic.twitter.com/tHqQnWzlRZ

Just take a look at the crowd hours before the event started. It was a packed house!

Event organizers had a stage and spoke for about an hour to the crowd about their plans and motivations for traveling to Washington.

Crowd gathering outside Adelanto Stadium for the sendoff of a U.S.-based trucker convoy from California to Washington DC today pic.twitter.com/L9mOXKCN3K

After the speakers finished, it was time for the trucks to roll out. Dozens of trucks lined up into position and poured out onto the open road to begin the eleven-day journey.

There are reportedly 1,000 vehicles ready to go out of the gate, with countless more joining or meeting them in DC.

Trucks lining up into position as the convoy towards DC prepares to depart from Adelanto, California this Wednesday morning pic.twitter.com/syVd9pqt47

This Is The BIGGEST Flaw The Media Made During COVID! 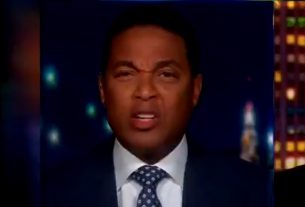 Even CNN’s Don Lemon Is Beginning To Think Biden Is Senile!