Skip to content
Home>Uncategorized>They Made The Election Tabulators, Now It Has BACKFIRED!

The voting machine equipment that was used in the last 2020 Election was supplied by the Silvestro Family to New Englanders for decades. But will the 2020 Election be their last?

Father John Silvestro has a LinkedIn profile where he claims to be the CEO and Treasurer of LHS Associates, Inc. 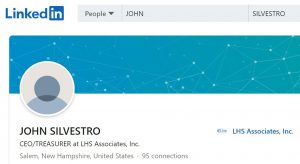 While he was the CEO of LHS Associates, John Silvestro was involved in a hearing in January 2008 to discuss the machines used in New Hampshire.

A report of this discussion published in 2016 said:

This video calls into question the accountability of the New Hampshire elections. Most New Hampshire vote counts are not observable. Votes have been counted on the Diebold Accuvote ballot scanner technology, which can easily create an incorrect result because it allows alteration of vote results.

Though a new version may address the particular vulnerability that was demonstrated, New Hampshire regulations require approval by the Ballot Law Commission before new versions can be installed, and that commission had not met to approve it before the 2008 presidential primary.

New England vendor for the system (LHS Associates’ John Silvestro, of Londonderry New Hampshire) attempted to mislead the House Election Committee, making a false statement that the problem had been addressed while knowing that it had not.

A text of the below video from 2008 and a copy of the video is available at Black Box Voting.org.

A dozen years later, John’s son is involved with LHS and he is president. We reported a couple of days ago, the younger Silvestro is present at the audit of the 2020 Election taking place in New Hampshire:

Jeff Silvestro is allowed to be present at the audit in New Hampshire which is unethical and his presence destroys any semblance of independence and objectivity the audit may have ever had. Jeff’s company uses Dominion tabulators:

Do you know anything about the Dominion tabulators used in Vermont and maintained by LHS Associates? pic.twitter.com/c4I5tlsE89

We don’t know if the Dominion tabulators have the same weaknesses as their predecessors in New Hampshire.

According to Silvestro, it appears that the individuals who oversee elections in New Hampshire would rather protect their election results and citizens who sell them election products than protect their citizens from election abuse.

What Fox Did To Reporter Who Spoke The Truth About Fauci Is Beyond Sickening!

This Hoarder Died With His House A Mess, What They Found Inside Was Worth MILLIONS!