I love the ideas and many concepts of technology in that you can get a hold of people that you couldn’t otherwise get in touch with quickly if you needed.

I remember when I was younger when I would go to visit my dad out of state if we needed to get a hold of mom it had to be an emergency on account o the phone bill. If that happened today, all you needed was two seconds to type out what you needed to say and that was it.

The problem with technology is that false narrative spread like wildfire and the people that host they falsehoods can turn their backs and walk away if they don’t want to do anything about it. Well, it seems that President Trump is going to keep fighting for us no matter what on the fake news account.

President Donald Trump said it was time to “take back America” Tuesday as he announced plans to veto the National Defense Authorization Act if safeguards remained in place to protect entities such as Google, Facebook and Twitter from lawsuits.

Big Tech platforms have angered conservatives by censoring Trump and others on the right while allowing false posts from leftist leaders to go unchecked.

Most notably, they have labeled or limited posts by the president questioning the security of mail-in ballots before the Nov. 3 general election and making allegations of voter irregularities and fraud afterward.

One example of Twitter’s labeling practice — placing a warning notification that reads, “This claim about election fraud is disputed” — occurred with an article Trump tweeted Tuesday shortly after he mentioned the potential veto.

In his comments Tuesday on Twitter, Trump called for the elimination of Section 230 of the Communications Decency Act of 1996, a provision that protects tech companies from the legal risk of hosting third-party content.

The president called it “corporate welfare,” “a liability shielding gift from the U.S. to ‘Big Tech’” and “a serious threat to our National Security and Election Integrity.”

“Our Country can never be safe and secure if we allow it to stand,” he said.

Section 230, which is a liability shielding gift from the U.S. to “Big Tech” (the only companies in America that have it – corporate welfare!), is a serious threat to our National Security & Election Integrity. Our Country can never be safe & secure if we allow it to stand…..

“Therefore, if the very dangerous & unfair Section 230 is not completely terminated as part of the National Defense Authorization Act (NDAA), I will be forced to unequivocally VETO the Bill when sent to the very beautiful Resolute desk,” Trump said in a follow-up tweet. 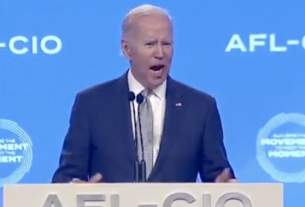 Biden Just Admitted He’s Using Inflation To Bend Them To His Will….

“This Should Be Disqualifying For Biden”: More Damning Footage Resurfaces [WATCH]