Skip to content
Home>Uncategorized>Trump’s Lawyers Need To Do Just ONE THING To Win At Impeachment!

There is one time in my life where I came close to getting into anything resembling criminal trouble, and I ended up getting away for one simple thing.

There was an incident once on the ship I was stationed on where a whole bunch of people was getting sent to Captain’s Mast, which is kind of like a trial for the uninitiated.

There is a whole process to this, and it works often the same way that normal legal proceedings work.

I spoke to the Master at arms when they first had to question me and I told them exactly what went down from my point of view and how I reacted to it. When they finally had the next phase of the situation I was told that if I kept telling the story that I had been telling the whole time I would get away without any problems because I was the only one that sounded believable.

The point is, if you are consistent and tell the truth you will always win out.

This entire impeachment case against Trump has been built on very shaky ground.

The Democrats are trying to impeach Trump on the grounds that he incited the riots at the U.S. Capitol during his speech that day.

Of course, we all know that there was nothing in Trump’s speech that would’ve incited any violence, not even swatting away a fly.

But what can and most likely has is what some Democrat leaders, like Michigan Rep Cynthia Jones, who recently issued this chilling statement on her “soldiers” making Trump supporters pay.

Hate to break it to you but if Trump had won, there would have been violence on Wednesday, and it most certainly would have been worse. How do I know? Because Democrats have been endorsing violence as a political tactic throughout the Trump Administration.

But that type of speech is fine by the left.

Absolutely nothing to see here.

But conservatives beg to differ and OANN’s Jack Posobiec shared one tweet that shreds their entire narrative. 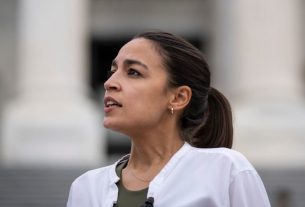 He Voted To Defund The Police, Then KARMA Stepped In!