Skip to content
Home>Uncategorized>Trump’s Surgeon General Has Been Savagely Attacked By Biden’s People!

The Biden administration is playing dirty again, I mean, they already have the office they always wanted but they continue to deny public service to anyone connected to former President Donald Trump.

Trump’s former surgeon general Jerome Adams, was allegedly denied the opportunity to refinance his mortgage after the government refused to verify his previous employment in the high-profile role.

Adams once criticized Biden’s handling of COVID-19, he is vocal about the issue. But Biden’s administration takes it personally – They’re not open for suggestions and criticisms, it’s like we’re living in a dictator government.

Adams tweeted Tuesday with a screenshot presumably from the financial institution where he is seeking a new home loan.

“Real email I just received while trying to refinance my mortgage.”

“I’m having an issue verifying your employment as the US Surgeon General. I used both addresses provided and the US Dept of Health and Humans Services was unwilling to provide the verification,” the unidentified party wrote.

Real email I just received while trying to refinance my mortgage… pic.twitter.com/79OeVPAVEf

Adams followed up with a screenshot of his Wikipedia entry showing that he held the position in the Trump administration from Sept. 5, 2017, to Jan. 20, 2021 — the day Trump left and Biden took office.

Adams humorously noted that “they won’t accept Wikipedia as a reference.”

This is what I sent them back. Apparently they won’t accept Wikipedia as a reference… pic.twitter.com/21IQ6jSlG1

This lighthearted take underscores the absurdity of the government’s resistance to providing that information when it’s a matter of public record and easily verifiable.

It’s possible this is one of the many bureaucratic blunders that happen every day, like when living people are declared legally dead through a paperwork mixup.

But if what Adams is being told is true, this sounds very much like another ominous sign of what’s to come for anyone who holds the wrong political views — complete ostracization from society.

This had already begun on a small scale when Trump was banned for life from some social media platforms and two of his multimillion-dollar bank accounts closed following the incursion into the U.S. Capitol on Jan. 6.

It happened recently to retired Army Lt. Gen. Michael Flynn, who was dropped from Chase Bank as a credit card customer for “reputational risk” to the institution, though the company later claimed it was done in error.

Flynn had pleaded guilty to charges of lying to the FBI, but later revelations about investigational misconduct made it clear he was railroaded, and Trump eventually pardoned him anyway.

Sure, private companies can do what they wish when it comes to serving customers (well, as long as they don’t refuse to bake a cake to celebrate sexual perversion), but these instances seem like part of a troubling trend toward blocking ideological undesirables from society.

With the modern world full of passive surveillance nearly everywhere already, Americans have gotten used to being watched, recorded, and tracked without putting up much of a fuss.

Americans grumbled but didn’t resist governments taking away their autonomy by keeping them locked in their houses during the COVID-19 pandemic, again conditioning the population to see free movement in society as a privilege to be revoked or reinstated at will.

And now the idea of requiring a vaccine passport to work at or patronize certain businesses has been normalized — and even championed — by people so eager to end the government restrictions that they will submit to medical treatment and produce their papers when prompted.

All of this would facilitate exactly the kind of crackdown that may have been imposed on Adams and certainly was on Trump and Flynn.

When those passports become part of a government registry that could be cross-checked with other data from a proposed IRS measure to monitor bank accounts over $600, it will become an invitation for the party in power to punish adversaries and push them out of society with just a few keystrokes.

And it seems the framework is already being constructed right under everyone’s nose in the U.S. for exactly that, and before long we could see the kind of social credit system China already has.

We’re already witnessing these high-profile individuals being forced to suffer for their ideology, though the possibility seems remote for the average person at first glance.

However, if this can happen to people in high places with large platforms and lots of political clouts, what’s to stop companies or even the government from doing this to ordinary citizens who can easily be silenced?

The frightening answer is that it is little any of us can do except sound the alarm that these things are happening already while pushing back against measures that seek to divide society and grant privileges based on political viewpoint.

What happened to Adams could be a glitch, or it could be part of a more sinister scheme that will come for everyone on the right, and chances are we won’t know until it’s too late if it’s the latter.

We soon could be living under the thumb of an oppressive, vengeful, powerful government with no way to defend ourselves — and we’ll long for the days when political opponents were simply insulted on Twitter instead of being “unpersoned” in society. 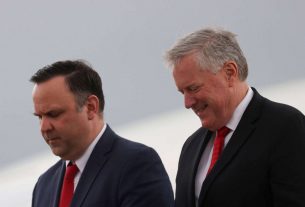 WOW! The DOJ Just Delivered A Major Blow To The Jan 6 Sham Committee!