Apparently, a group of Canadian researchers concluded that the way we drink coffee is related to climate change! That is one of the conclusions of a study conducted by Canadian scientists to ascertain the effects of the crucial daily beverage, coffee, on climate change. Another important, albeit difficult-to-accept, the conclusion they came to was that a lot less coffee might be needed to save the planet.

However, as we all know, Coffee is a big deal globally.

According to the British Coffee Association, 2 billion cups of coffee are drunk daily. Meanwhile, in the website coffee-rank, the United States has a daily coffee consumption rate of about 65 percent, significantly higher than the global average of 30 to 40 percent.

Now, to compare how coffee is made to determine which method is the most environmentally friendly, all of this prompted researchers at the University of Quebec at Chicoutimi, Luciano Rodrigues Viana, Charles Marty, Jean-François Boucher, and Pierre-Luc Dessureault led to conduct the study.

In the study that was published in early January on the website The Conversation, they said:

“Limiting your contribution to climate change requires an adapted diet, and coffee is no exception. Choosing a mode of coffee preparation that emits less GHGs [greenhouse gases] and moderating your consumption are part of the solution.”

The study examined instant coffee, regular coffee makers, French presses, and coffee pods, which it refers to as capsules.

They wrote, “Our analysis clearly showed that traditional filter coffee has the highest carbon footprint, mainly because a greater quantity of coffee powder is used to produce the amount of coffee. This process also consumes more electricity to heat the water and keep it warm.”

Instant coffee won the competition due to “the low amount of soluble coffee used per cup, the kettle’s lower electricity consumption compared to a coffee maker, and the absence of organic waste to be treated,” all of which reduce the carbon footprint of coffee consumption.

As per The Washington Post, researcher Viana said, “At the consumer level, avoiding wasting coffee and water is the most effective way to reduce the carbon footprint of coffee consumption.”

However, people argued, as they do not always allow that option to actually be the best. The study said:

“On the other hand, when consumers use a 20 percent surplus of coffee and heat twice the water needed (which is often the case), coffee capsules [pods] seem to be the best option. Why? Because the capsules allow you to optimize the amount of coffee and water per consumption.”

The Washington Post reported that one expert noted that Pods frequently appear to be the least environmentally friendly option due to the container. Professor of sustainable systems at the University of Michigan School for Environment and Sustainability Shelie Miller made the statement, she said:

“As a consumer, what we’re left with is the visible waste in front of us, and that often tends to be packages and plastics. But the impact of packaging, in general, is much, much smaller than the product itself.”

But according to Euronews, Viana said, “I don’t think that capsules are a miracle solution. But it is a good example that illustrates our cognitive biases.”

However, the study noted that pods do, of course, have a negative side. Noting that issues with how pods are recycled could further negate their advantage, the study said, “[T]he convenience of capsule machines can lead consumers to double their coffee consumption, thus making this environmental advantage redundant.”

“More than half of the carbon footprint of coffee comes from the measures taken by coffee farmers and suppliers” for anyone who wants to stress about how to preserve the earth and enjoy the coffee they want, as the study also noted.

Watch: Mel Gibson and Vince Vaughn’s Reaction During Meryl Streep’s Anti-Trump Diatribe They Were NOT Impressed! 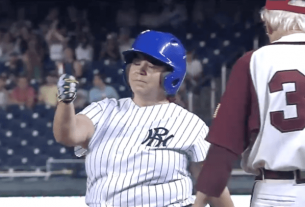