The thing that people need to understand about the folks on the Obama side of things is that they don’t want things to run in an orderly fashion unless someone on their side is running things.

Why do you think that ever since Trump has been in office that they have done everything that they can to disrupt what he has been trying to do?

By Carmine Sabia at The Federalist Papers

Democrats are beyond unhinged at the fact that President Donald Trump is the leader of the United States.

They have done everything in their power to sow discord and anger and resentment among the American people.

They pit rich versus poor, black versus white, male versus female, straight versus LGBT and they have done that for decades.

But since the election of President Trump they have increased the us versus them rhetoric to the point where it has become dangerous.

They have gone so far as to fake hate crimes like the Covtington Catholic High School scandal and the Jussie Smollett hoax.

And it is in an effort to trigger people to fight for them at the polls and in the streets.

Now a former aide to former President Obama has admitted that the end game for him is a Civil War.

Joshua Geltzer, who served in various roles in Obama’s administration, wrote in an op ed for CNN where he would want a military option.

Our civilian and uniformed Defense Department leaders have a role to play. The health of our democracy rests, in part, on not involving the military in transfers of power. And that should continue.

But imagine the most extreme scenario, with Congress certifying Trump’s defeat but Trump refusing to leave office. In those circumstances, the military would no longer owe its loyalty to Donald Trump as of noon on January 20, 2021.

And it’s worth asking the Secretary of Defense and Chairman of the Joint Chiefs of Staff, as they testify before Congress in coming months, to affirm that they understand that and would act consistently with it.

The op ed was titled “What if Trump refuses to accept defeat in 2020?” which is ironic considering that Democrats have still not accepted defeat from 2016.

He was joined by MSNBC analyst Laurence Tribe who gave credence to the insane idea of having the military intervene.
“It’s not too soon to start thinking about the unthinkable: What if Trump refuses to leave peacefully when he loses in 2020 or is removed by the Senate sooner? @jgeltzer offers four sensible steps we can take NOW to minimize this existential threat,” he said.

It’s not too soon to start thinking about the unthinkable: What if Trump refuses to leave peacefully when he loses in 2020 or is removed by the Senate sooner? @jgeltzer offers four sensible steps we can take NOW to minimize this existential threat https://twitter.com/jgeltzer/status/1099333668290613248?s=21 …

What if Donald Trump loses in 2020 but won’t leave the Oval Office peacefully?

There’s real reason to worry. I offer via @CNNOpinion four things we can do NOW to get ahead of this threat to our democracy: https://www.cnn.com/2019/02/23/opinions/trump-contest-2020-election-loss-geltzer/index.html …

852 people are talking about this

The insanity of these people, to call for military intervention two years before an election they do not look like they are going to win.

Thanks to our good friends at The Federalist Papers for permission to republish this material.

Florida Gov Just Warned Antifa To NOT CROSS THE BORDER!

Kamala Made A Really Strange Move When Biden Was Speaking… 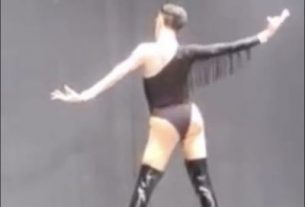 What This School Let A DRAG QUEEN DO TO CHILDREN Will Make You Vomit!